Brazilian President Jair Bolsonaro met with Donald Trump at the White House Tuesday, and the two men celebrated their similarities.

In a joint press conference aired live from the Rose Garden President Bolsonaro announced that he stands “side by side” with Trump in the fight  fight against same-sex marriage, transgender people, and fake news.

In conclusion, may I say that Brazil and the United States stand side by side in their efforts to ensure liberties, and respect to traditional family lifestyles, respect to God our creator, against the gender ideology or politically correct attitudes, and against fake news.

I’m very proud to hear the president use the term ‘fake news.’

Bolsonaro, Brazil’s new president, is a dangerous Christian fascist who promises to remake Brazil into a Christian theocracy.

After his electoral victory, Reuters reported:

The Christian “family values” Bolsonaro hopes to defend as Brazil’s president include homophobia and misogyny. For example, on gays he said:

In addition to endorsing homophobia and misogyny in the name of Christianity, Bolsonaro has also endorsed racism and the torture and murder of political opponents. And the Christians love him for it. 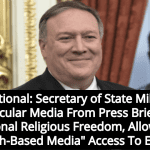 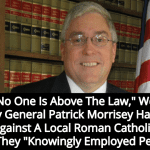 March 20, 2019 West Virginia Sues Catholic Church Because They ‘Knowingly Employed Pedophiles’
Recent Comments
0 | Leave a Comment
Browse Our Archives
get the latest from
Nonreligious
Sign up for our newsletter
POPULAR AT PATHEOS Nonreligious
1