Good news: The West Virginia attorney general has filed suit against a Catholic diocese, alleging that it knowingly employed pedophiles.

The West Virginia attorney general filed a lawsuit Tuesday claiming that a local Roman Catholic diocese and former bishop failed to protect children from predator priests and teachers — and violated consumer protection laws by not alerting parents there were abusers on the payroll.

Reporting on the story, The New York Times notes:

The civil suit is notable for its unusual approach: It accuses church leaders of violating a consumer protection law, a statute that is more commonly applied to companies, not religious institutions.

The West Virginia approach alleges that the diocese and bishop “knowingly employed pedophiles” at Catholic schools and camps but did not disclose to parents the “danger” of sending their children to these programs, which advertised safe environments. The suit also says that church officials did not conduct adequate background checks for employees of Catholic schools and camps.

In a statement to The Hill concerning the lawsuit, West Virginia Attorney General Patrick Morrisey said:

Parents who pay and entrust the Wheeling-Charleston Diocese and its schools to educate and care for their children deserve full transparency.

Our investigation reveals a serious need for the Diocese to enact policy changes that will better protect children, just as this lawsuit demonstrates our resolve to pursue every avenue to effectuate change as no one is above the law.

In a phone interview with The New York Times Attorney General Morrisey said:

We believe that every parent who paid tuition for a service that falls under consumer protection laws deserves to know the schools their children are attending are safe. The church itself advertised that these children would be in a safe environment.

Commenting on the lawsuit, The Hill explains:

The civil complaint alleges that the diocese and former Bishop Michael J. Bransfield did not conduct adequate background checks and sometimes hired staff who admitted to sexually abusing children.

The suit alleges that Father Patrick Condron admitted to sexually abusing a student, was sent to treatment and then got assigned to a local elementary school. Parents were not notified that the school “was employing a pedophile,” the lawsuit states.

Several cases similar to Condrons are detailed in the suit.

Bottom line: Claiming that “no one is above the law,” West Virginia Attorney General Patrick Morrisey has filed a lawsuit against a local Roman Catholic diocese because they “knowingly employed pedophiles.” 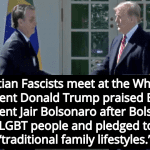 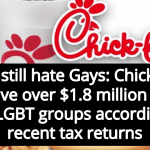 March 20, 2019 Report: Chick-fil-A Gave Over $1.8 Million To Anti-Gay Christian Hate Groups
Recent Comments
0 | Leave a Comment
"Fuck69 you, you lying disgusting cocksucker69."
DeadBabyJoke Boy Scouts Of America Banned Atheists ..."
"It’s worth noting that in the troop my father was Scoutmaster of, he interpreted Reverent ..."
SkyknightXi Boy Scouts Of America Banned Atheists ..."
"Verily I say unto ye, the Earth is between six thousand and ten thousand years ..."
Gord O'Mitey Tennessee Lawmaker: No ‘Solid Evidence’ Earth ..."
"The earth's age is seen to be sone 14 billion plus years old. The Colorado ..."
Dave Ottens Tennessee Lawmaker: No ‘Solid Evidence’ Earth ..."
Browse Our Archives
Follow Us!