Former Alabama Supreme Court Chief Justice Roy Moore leads the field of potential Republicans vying for the chance to challenge Sen. Doug Jones (D), a year and a half after Moore lost what was supposed to be an easy election in a deep-red state.

Apparently Alabama Republicans continue to support Moore despite the fact that in November 2017, during a Senate special election in Alabama, nine different women came forward with allegations of sexual misconduct, child molestation, and pedophilia against Moore.

According to multiple reports the Alabama politician sexually abused a 14-year-old-girl and pursued many other teenager girls while in his early 30’s.

The fact is, Roy Moore is a dangerous religious extremist and a moral monster not qualified to hold any public office.

For example, Moore rejects science in favor of religious superstition, and rejects the indisputable fact that biological evolution is true. Previously  Moore explained his rejection of science to the Washington Post, claiming:

Moore, like Trump, is also a white nationalist and a birther who repeatedly questioned Barack Obama’s eligibility to be president.

In short, Moore is a dangerous religious extremist who places his Christian faith above the U.S. Constitution, and believes that “God is the only source of our law, liberty and government.”

Bottom line: Roy Moore is a dangerous Christian extremist who sexually abused a 14-year-old-girl, and pursued sexual relationships with other underage girls while serving as a district attorney, but conservative Christian Republicans in Alabama still support him. 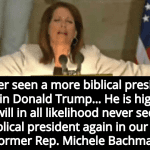 April 15, 2019
Michele Bachmann: Trump Is Most ‘Godly, Biblical’ President In Our Lifetime
Next Post 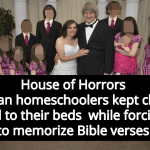 April 19, 2019 Christian Homeschoolers Get 25 Years To Life For Torture And Abuse Of Their 13 Children
Recent Comments
0 | Leave a Comment
Browse Our Archives
get the latest from
Progressive Secular Humanist
Sign up for our newsletter
POPULAR AT PATHEOS Nonreligious
1