Michele Bachmann: Trump Is Most ‘Godly, Biblical’ President In Our Lifetime

I will say to your listeners, in my lifetime I have never seen a more biblical president than I have seen in Donald Trump.

He is highly biblical and we will in all likelihood never see a more godly, biblical president again in our lifetime. So we not only need to be praying for him, we need to support him, in my opinion, in every way that we can.

Listen to Bachmann’s remarks below –

Bachmann is a controversial figure, and a dangerous Christian extremist. In the past Bachmann has:

Bottom line: Former Rep. Michele Bachmann claims she has “never seen a more biblical president” than Donald Trump, and claims that Trump “is highly biblical and we will in all likelihood never see a more godly, biblical president again in our lifetime.” 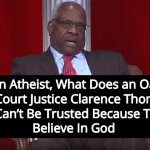