Huckabee, a Christian minister who served as the 44th governor of Arkansas from 1996 to 2007, and who also ran as a candidate in the United States Republican presidential primaries in both 2008 and 2016, is the father of current White House press secretary Sarah Huckabee Sanders, and a confirmed anti-gay bigot.

Speaking with The Christian Post during a sit-down interview last week in Anaheim, California, Huckabee blamed Christian churches for their “failure to apply a biblical standard of maleness and femaleness.” Huckabee said:

The biggest threat to biblical principles today is the failure to apply a biblical standard of maleness and femaleness.

We are creating this illusion that there is no gender, there is no identity, and I’m blaming the Christian Church.

The anti-gay conservative Christian went on to blame California’s introduction of “no-fault divorce” in 1970 for the decline of “biblical marriage” and rigidly defined gender roles. Huckabee explained:

That’s when we first started losing that sense of sacredness of what marriage meant. So I’m not really that surprised that same sex-marriage has become in vogue because the Christian Church were the ones who essentially abdicated a strict responsibility about what biblical marriage should look like.

Once you’ve destroyed that, why can’t you have any and everything? The gender dysphoria we’re seeing today is largely due to the fact that the Church has failed to present very clearly the words of Jesus and Genesis 5:2: ‘Male and female He created them.’

It is no secret that Huckabee is a dangerous and ignorant Christian extremist. In the past Huckabee promised that if elected president he would fight the “secular theocracy” that is supposedly destroying Christian liberty in America; made the false claim that pastors would face civil and criminal penalties if they refused to perform same-sex marriage; and said if elected president he would ignore the Supreme Court ruling on marriage equality because the Supreme Court is not the “Supreme Being.” 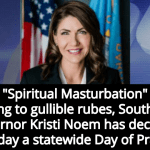 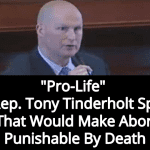 April 10, 2019 Texas Law Would Punish Women Who Have Abortions With Death Penalty
Recent Comments
0 | Leave a Comment
Browse Our Archives
get the latest from
Progressive Secular Humanist
Sign up for our newsletter
POPULAR AT PATHEOS Nonreligious
1