Good News: The Satanic Temple has won official recognition from the Internal Revenue Service (IRS) as a tax-exempt church.

We are pleased to announce that for the first time in history, a satanic organization has been recognized by the United States federal government as being a church. The Satanic Temple recently received notice from the IRS affirming our status. This acknowledgement will help make sure the Satanic Temple has the same access to public spaces as other religious organizations, affirm our standing in court when battling religious discrimination and enable us to apply for faith-based government grants.

In a statement, Lucien Greaves, co-founder The Satanic Temple, explains why the group sought out tax-exempt status:

In light of theocratic assaults upon the Separation of Church and State in the legislative effort to establish a codified place of privilege for one religious viewpoint, we feel that accepting religious tax exemption — rather than renouncing in protest — can help us to better assert our claims to equal access and exemption while laying to rest any suspicion that we don’t meet the qualifications of a true religious organization. Satanism is here to stay.

For the record, the Satanic Temple does not promote the worship of Satan, or any other imaginary deity. Instead, the group utilizes satanic imagery to promote egalitarianism, social justice, and the separation of church and state.

Previously the Satanic Temple made headlines after offering to escort Muslims who were afraid to leave their homes out of fear of a growing anti-Muslim backlash resulting from the Paris terrorist attacks.

In addition, the Satanic Temple has been on the front lines in defending a woman’s right to an abortion and promoting the separation of church and state guaranteed by the First Amendment to the U.S. Constitution.

Also, it is worthwhile to note that when it comes to morality, the Satanic Temple’s Seven Tenets are morally superior to the Bible’s Ten Commandments.

Bottom line: The IRS has officially recognized the Satanic Temple as a tax-exempt Church. 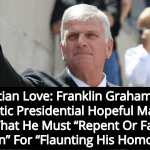 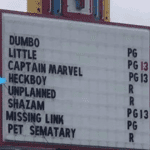 April 25, 2019 Tennessee Theater Censors ‘Hellboy’ On Sign Because Bible Belt
Recent Comments
0 | Leave a Comment
Browse Our Archives
get the latest from
Nonreligious
Sign up for our newsletter
POPULAR AT PATHEOS Nonreligious
1