Christian TV Host Rick Wiles: We Will Impose Christian Rule In This Country

Right Wing Watch reports that Wiles, host of TruNews, a television “news” program produced for conservative Christians, “praised Alabama’s radical new anti-abortion law and warned that those who support reproductive rights will spend eternity being ‘aborted continuously forever’ by demons in Hell” on the Wednesday night edition of his program.

Wiles returned to that theme On Thursday night’s program Wiles continued to discuss the recent abortion law, citing an op-ed from the Israeli paper Haaretz and written by Debra Nussbaum Cohen. In her post Cohen wrote:

[Alabama’s new abortion law is] a threat to my religious freedom as a Jew … because according to classical Jewish text and most rabbinic interpreters, a developing embryo or fetus is not ‘an unborn child’ or ‘person,’ but has the legal status of an appendage of the pregnant woman. It is part of her body, not a separate person, until the moment that a majority of a viable baby capable of independent life has been born.”

After reading from Cohen’s post Wiles launched into a wild anti-semitic rant where he argued that Christians are going to take back America from the Jews and “impose Christian rule.

In his rant Wiles said:

We Christians are standing up and pushing out Zionism. That’s what we’re doing. Zionism brought the slaughter of 65 million babies to America and we’re going to end it and we are going to impose Christian rule in this country.

Why are you imposing Judaism on me? Because that’s exactly what’s been done in America since 1973 with Roe v. Wade. Judaism was imposed on me, on my Christian nation and we became a Jewish nation that kills babies. That’s against my Christian beliefs.

Judaism became the law of the land in America. That’s precisely what the courts have ruled. They have based their rulings on the Zohar, on the Talmud, and now we have Zionistic Talmudic law ruling this country and resulting in the death of millions of babies.

Another example of Wiles being a conservative Christian idiot: Last summer the Christian TV host  warned his followers that MSNBC’s Rachel Maddow was preparing to lead a bloody coup to overthrow the Trump administration. Wiles, commenting on a Maddow segment in which the MSNBC host argued that the U.S. must prepare for “the worst case scenario that Trump is compromised by Russia,” declared: 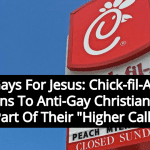 May 17, 2019
Chick-fil-A Claims Hating Gays Is Part Of Their ‘Higher Calling’
Next Post 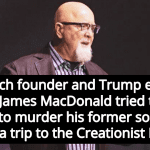