GOP Lawmakers Plan For 51st “Christian State” To Be Based On Biblical Law May 30, 2019 Michael Stone

Dreams of Christian theocracy: Republican lawmakers are raising money to promote a plan for a 51st “Christian state” which would be based on Biblical law.

Last week GOP lawmakers held a fundraiser for the proposed creation of a 51st state called “Liberty,” a “Christian state” that would “span parts of Washington and Oregon, as well as Idaho, Montana and Wyoming” and be based on biblical law.

The movement to create a Christian state in the Pacific Northwest is being led by Washington state Rep. Matt Shea

The Liberty State Gala drew about 200 people to the CenterPlace Regional Event Center in Spokane Valley. Supporters of the new Christian conservative state — which would span parts of Washington and Oregon, as well as Idaho, Montana and Wyoming — raised money by auctioning pies and other desserts.

The lineup of speakers included Shea, a Spokane Valley Republican who has championed the Liberty State movement; Spokane City Councilor Mike Fagan; Spokane City Council candidate Tim Benn; and Loren Culp, the police chief in Republic, Wash., who made national headlines when he pledged not to enforce a controversial gun control initiative that voters passed in November.

Earlier this year Shea was caught plotting violent attacks against progressive opponents. According to reports, Shea offered to run background checks on suspected political opponents for a right wing conservative Christian group to facilitate a planned covert operation of surveillance, terror, and even violence against left wing activists perceived by the group to be political threats.

Bottom line: Washington state Rep. Matt Shea, who recently published a Christian manifesto calling for the execution of all males who refuse to follow “Biblical law,” is leading the GOP plan for a 51st “Christian state” which would be based on Biblical law. 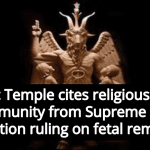 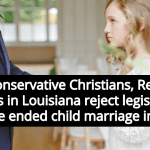 June 4, 2019 Louisiana Republicans Reject Legislation That Would Ban Child Marriage
Recent Comments
0 | Leave a Comment
"I am called a bigot, a fool, referred to as "my kind", "nigerian white supremacist ..."
MrPeach Texas Governor: ‘The Problem is Not ..."
"you sure can run your mouth here, now explain your downvote to my harmless comment. ..."
Joshua Booker Million MAGA March: Militias, Proud Boys, ..."
"now I see why you hide your name. Some TROLL in ya=== lol!"
Brian Carnevale Texas Governor: ‘The Problem is Not ..."
"The cowardly censor at FA banned me years ago.There was an uncensored Angry Atheist channel, ..."
Pablo.Dali Fox News Host Bill Hemmer Warns ..."
Browse Our Archives
get the latest from
Progressive Secular Humanist
Sign up for our newsletter
POPULAR AT PATHEOS Nonreligious
1