More hate for Jesus: Christian leader and Focus On The Family founder James Dobson claims that if the Equality Act passes, Democrats and their friends in the LGBT movement will “enslave” conservative Christians.

Dobson, a dangerous Christian extremist, issued an “urgent warning” earlier this week about “one of the most egregious assaults on religious liberty ever foisted on the people of this great nation.”

In the history of our nation, there have been times when evil was so apparent—and so heinous — that they stand in infamy decades later. They include the Dred Scott Decision on slavery in 1857 and the Roe v. Wade ruling that legalized abortion in 1973. Now, we are faced with another such tragic moment in American history.

A few days ago, on May 17, Democrats in the House of Representatives passed what they call The Equality Act of 2019, which is breathtaking in its scope. If it survives a vote in the Senate, this legislation will represent one of the most egregious assaults on religious liberty ever foisted on the people of this great nation. It therein imposes a thinly veiled death-sentence to the First Amendment to the Constitution and takes away the protections against tyranny handed down to us by our Founding Fathers. It was this unyielding commitment to religious liberty that led to American Revolutionary War from 1775 to 1783. The pastors and the patriots of that day died to free themselves from British imperialism. Thank God for the men who stood courageously against the most powerful military in the world, because freedom meant more to them than their own lives.

Let me speak candidly and passionately to people of faith throughout these United States of America. We must not remain silent as our historic liberties are gutted by Democrats and their friends in the LGBT movement. They will enslave us if they prevail. We must let our voices be heard, first in the U.S Senate, and then to the world.

In short, James Dobson believes that the Equality Act, which seeks to simply add protections against discrimination on the basis of sexual orientation and gender identity to existing civil rights laws, poses an extreme existential threat to conservative Christians.

Indeed, Dobson claims that granting LGBT citizens equal protection under the law will result in conservative Christians being enslaved by “Democrats and their friends in the LGBT movement.”

In essence, Dobson knows that if the Equality Act were to become the law of the land, conservative Christians would be legally obligated to treat LGBT citizens in a fair and equal matter. And for Dobson,that is the equivalent of enslavement.

Dobson is a dangerous idiot. Indeed, Dobson is a deplorable human being with a record of homophobia and hatred in the service of Christ and supposed “family values.”

Previously, in a vicious rant the Focus on the Family founder said that transgender people using public restrooms should be shot. Writing for World Net Daily Dobson complained about President Obama’s order to “every public school in America to open all its bathroom facilities including those that are in use by a member of the opposite sex.” Dobson wrote:

In short, Dobson gives Christians permission to shoot transgender people using a public bathroom, supposedly because such a crime would protect “little girls from men.”

Yet Dobson, like most conservative Christians, is a hypocrite. In 2017 the supposed champion of “family values” supported Roy Moore, a child molester, for U.S. Senate. In a radio ad for the child molester Dobson declared:

Judge Moore is a man of proven character and integrity

Yet by endorsing Moore, Dobson is sending a clear message that young girls don’t matter, and that “good, Christian men” like Roy Moore should be free to sexually harass and assault teenage girls without fear of consequence.

Bottom line: James Dobson, a supposed champion of “family values,” is a Christian hypocrite who claims that if the Equality Act passes, Democrats and their friends in the LGBT movement will “enslave” conservative Christians.

May 22, 2019
Mississippi Lawmaker Doug McLeod Punches Wife In Face For Not Getting Naked For Sex
Next Post 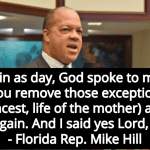