Outrageous miscarriage of justice: The Michigan Supreme Court has just issued a ruling declaring that it’s not child neglect to withhold medical care if parents are doing so because of sincere religious beliefs.

A Lansing couple trying to keep custody of two children can argue that legitimate religious beliefs prevent them from seeking medical care for their children.

The Michigan Supreme Court says Rachel and Joshua Piland can request that jury instruction if they present sufficient evidence during a custody trial in Ingham County. The Pilands say their beliefs trump any allegations of neglect.

The ruling comes as a response to issues raised in a parental custody case involving Rachel Joy Piland, and her husband, Joshua Barry Piland, who have been charged with involuntary manslaughter after refusing to seek medical treatment for their newborn daughter.

Currently the Piland’s are in a custody battle, trying to regain custody of their two oldest children after allowing their 3-day-old daughter, Abigail, to die. The couple refused to seek medical treatment for their newborn daughter “even after a midwife warned that the infant’s jaundice could lead to brain damage or death.”

Despite the warning, the Piland’s did not seek treatment for their daughter, Abigail, with tragic consequences.

As part of the ongoing custody battle, the Pilands’ attorney had asked Ingham County Circuit Court Judge Laura Baird to tell the jury about a Michigan law that states:

A parent or guardian legitimately practicing his religious beliefs who thereby does not provide specified medical treatment for a child, for that reason alone shall not be considered a negligent parent or guardian.

However, Judge Baird refused to tell the jury about the law, arguing that negligence and neglect were “two different bodies of law” in child protection cases. But the Michigan Supreme Court overruled Judge Baird. The Lansing State Journal reports:

The Supreme Court ruled that Baird should give the jury instruction only if it is requested by the Pilands and if the evidence shows that the Pilands were legitimately practicing their religion at the time they failed to provide medical care.

The ruling is terrible, and could have disastrous consequences, not just for the Pilands’ children, but for all children in Michigan who are victims of parents who place their religious superstition above medical science and the health and welfare of their children.

Bottom line: The Michigan Supreme Court has just issued a ruling declaring that it’s not child neglect to withhold medical care if parents are doing so because of sincere religious beliefs. 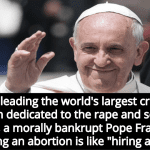 May 26, 2019 Pope Francis, Defender Of Pedophiles, Claims Abortion Is Like ‘Hiring A Hitman’
Recent Comments
0 | Leave a Comment
Browse Our Archives
get the latest from
Progressive Secular Humanist
Sign up for our newsletter
POPULAR AT PATHEOS Nonreligious
1