Dangerous Dishonesty: Vice President Mike Pence makes the outrageous and false claim that some Democratic governors are advocating for “late term abortion and even infanticide.”

Pence made his incendiary and false claim on Twitter:

It is not the first time that Pence has made the despicable and patently false claim that Democrats want to murder or execute infants. Last month, speaking at the 46th annual Conservative Political Action Conference (CPAC), Pence said:

With Democrats standing for late-term abortion and infanticide and a culture of death, I promise you this president, this party and this movement will always stand for the unborn. We will always defend the unalienable right to life.

Stop lying. Late term abortion is rare and not infanticide. You and the @GOP liars pushing this false narrative are cynical, awful human beings.

As a healthcare provider for over 30 years, no one is advocating for infanticide. I invite you to come to work with me in the NICU any day and meet the families who have to say goodbye to their beloved children because we cannot save them despite our best efforts. Stop lying.

You are a liar. No one is advocating for infanticide. You are evil to twist newborn palliative care. Why do you hate terminally ill babies and their parents so much? https://t.co/D6B0sjUMW0

The false claim that Democrats are advocating for infanticide is a despicable lie often spread by dishonest, forced-birth, anti-abortion extremists like Pence. Indeed, The New York Times, CNN, PolitiFact, and other reputable news outlets all agree that such claims are inflammatory and false.

More important, such claims are nothing less than an incitement to violence, and constitute a clear case of stochastic terrorism – “the use of mass public communication, usually against a particular individual or group, which incites or inspires acts of terrorism…”

Indeed the false claim that Democrats support infanticide, and that doctors are actually executing babies, is an incitement to violence and an act of stochastic terrorism that puts health care workers at risk and virtually guarantees future violence against abortion providers and others.

Bottom line: In a deplorable tweet Vice President Mike Pence makes the despicable and false claim that Democrats are advocating for “late term abortion and even infanticide.” 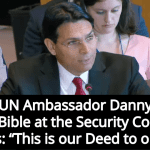 May 4, 2019
Israel’s U.N. Ambassador Claims Bible Proves Jews Own All Of Palestine
Next Post 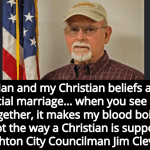 May 6, 2019 Georgia City Councilman: Interracial Marriage Is Not How Christians Should Live
Recent Comments
0 | Leave a Comment
Browse Our Archives
Follow Us!