Moral failure: Pope Francis issues new church law that sexual abuse must be reported to church officials, but not the police, not the state, not the secular authorities.

Pope Francis has made it mandatory for Roman Catholic clergy to report cases of clerical sexual abuse and cover-ups to the Church.

Many in the mainstream media are praising the new law as “groundbreaking.” And to be fair, it is a slight improvement. Previously church officials were not mandated to report sexual abuse, or suspected sexual abuse, to anyone. The new church law changes that. The BBC notes:

For the first time, clerics and other Church officials will be obliged to disclose any allegations they may have heard. Previously, this had been left to each individual’s discretion.

Yet the new law mandates that reports be made to church superiors, not the police, not the state, not the secular authorities. Reporting on the story The Guardian notes:

However, the church law does not require police to be notified. The Vatican has said that different countries’ legal systems make a universal reporting law impossible, and that imposing one could endanger the church in places where Catholics are a persecuted minority.

There’s no rule requiring priests to report the allegations to law enforcement officials.

There’s no penalty for Church leaders who don’t follow the rules.

There’s no rule about financial reparations for victims.

If an abuser confesses his crimes to a priest in a confessional booth, it’s still considered sacred, secret information.

Peter Isely, a survivor of sexual abuse and one of the founding members of Ending Clergy Abuse, explains the obvious problem with the Pope’s new law:

Bishops reporting to themselves, that’s been the problem from the beginning. All they did was add another layer of bureaucracy; this doesn’t require civil authorities. What we need are police and prosecutors.

This isn’t just about letting us down. It’s about leaving children at risk. Around the world, right now, kids are at risk of being hurt. The church fails survivors over and over again – they make promises it’ll get better, and then those promises are broken.

Zach Hiner, executive director of the Survivors Network of those Abused by Priests (SNAP), echoes the concern that the new law does not require police to be notified. Hiner said:

If the church was truly listening to the pulse of the public and of survivors, they would know that they should be mandating priests and nuns report everything to outside, secular authorities.

I get the argument that in some places of the world Catholics are discriminated against. However, for most of the world, that’s not the case. In most of the world we have police and prosecutors who care about local communities and want to keep them safe, and that’s who we charge to get to the bottom of things like this.

Yet despite overwhelming evidence that the Catholic Church is a profoundly and irredeemably morally corrupt institution that allows children to be treated as disposable sex toys for predatory clergy, Catholics continue to support the church. In so doing Catholics fund the cover-up, and make the continuing rape and sexual abuse of children by Catholic clergy possible.

Bottom line: By not requiring the police or other secular authorities to be notified, Pope Francis continues to enable the rape and sexual abuse of children by Catholic clergy. 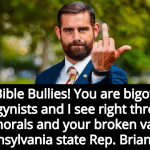 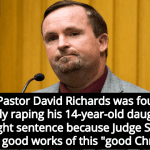 May 13, 2019 Tennessee Pastor Who Repeatedly Raped Daughter, 14, Gets Light Sentence Because Jesus
Recent Comments
0 | Leave a Comment
"And JC said, starve the little chidren, for as much as you do it unto ..."
David Cromie Fox News Guest: Children Don’t Deserve ..."
""....are there no work houses....""
Erik1986 Fox News Guest: Children Don’t Deserve ..."
"Tsarist Russia was anything but a free market, and neither was the aristocratic system in ..."
Person223 Fox News Guest: Children Don’t Deserve ..."
"The right of males to reproduce, rendering a woman's reproductive organs chattel, disregarding the whole ..."
Anon E Moss New Legislation In Tennessee Would Allow ..."
Browse Our Archives
get the latest from
Nonreligious
Sign up for our newsletter
POPULAR AT PATHEOS Nonreligious
1