Because nothing says Christian love like murder for hire: Megachurch Pastor James MacDonald, founder of Harvest Bible Chapel, is under investigation for trying to hire a hitman to kill his former son-in-law.

MacDonald, a former member of President Donald Trump’s evangelical advisory board, is under investigation for allegedly trying to hire a hitman to murder his former son-in-law.

“A subject came in and filed a report and we are doing an investigation based on that report,” Wilmette Deputy Police Chief Pat Collins confirmed with The Christian Post Monday.

According to a report first filed by independent journalist Julie Roys, MacDonald is being accused by his former bodyguard Emmanuel “Manny” Bucur and Chicago radio personality Mancow Muller of trying to hire a hitman to kill former son-in-law Tony Groves.

Muller alleges that MacDonald asked him at least twice in 2018 if he knew a hitman he could hire. Initially, he thought that the HBC founder was joking but it became clear to him during a conversation in December that MacDonald was “really serious”…

Bucur alleged that about three years before that, in 2015, MacDonald asked him to kill his former son-in-law, Tony Groves, and offered to help dispose of the body…

Bucur alleges that MacDonald asked him to kill Groves while they were on a motorcycle trip to the Creation Museum in Petersburg, Kentucky, from July 31, 2015, to August 2, 2015.

If found guilty of solicitation to commit murder, MacDonald could face a prison sentence of up to 30 years.

Bottom line: According to multiple reports megachurch founder and Trump evangelical advisor James MacDonald tried to find a hitman to murder his former son-in-law while on a trip to the Creationist Museum. 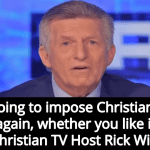 May 17, 2019
Christian TV Host Rick Wiles: We Will Impose Christian Rule In This Country
Next Post