Right Wing Watch reports that Wiles, host of TruNews, a television “news” program produced for conservative Christians, believes that “plant-based alternatives to meat and dairy products, is part of a satanic plot to alter human DNA so that people can no longer worship God.”

Appearing on his program earlier this week, Wiles said:

When you go to your favorite fast food restaurant, you are going to be eating a fake hamburger. You’re going to go to the grocery store and buy a pound of fake hamburger or a fake steak, and you won’t know that it was grown in some big corporation’s laboratory. This is the nightmare world that they are taking us into. They’re changing God’s creation. Why? Because they want to be God.

God is an environmentalist. He takes this very seriously. He created this planet, he created the universe and he’s watching these Luciferians destroy this planet, destroy the animal kingdom, destroy the plant kingdom, change human DNA. Why? They want to change human DNA so that you can’t be born again. That’s where they’re going with this, to change the DNA of humans so it will be impossible for a human to be born again. They want to create a race of soulless creatures on this planet.

Wiles is a popular but controversial conservative Christian leader who often makes outrageous and idiotic claims.

Perhaps even more alarming, last month Wiles told his audience that conservative Christians will “impose Christian rule in this country,” while warning that those who support reproductive rights will spend eternity being “aborted continuously forever” by demons in Hell. 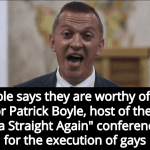 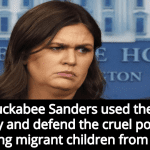