The truth hurts: Christians are angry after Taylor Swift mocks anti-LGBT activists for being ignorant hicks in her new and very popular music video “You Need To Calm Down.”

In her new music video, Swift advocates for LGBT people, while mocking the ignorance and hatred of the anti-LGBT movement. The video is a light and joyous romp with a not so subtle message to anti-gay bigots: “You Need To Calm Down.”

However, some Christian don’t want to calm down, because they are angry with Swift for her honest and devastating portrait of anti-gay bigotry. For example, Charisma News is quite angry that Swift “openly mocks Christians who protest homosexuality”:

Taylor Swift’s latest music video is a lot to take in, from the bright colors to scantily dressed celebrities to the flaunting of lesbian, gay, bisexual and transgender icons. The video, while claiming to be inclusive, openly mocks Christians who protest homosexuality.

Christians in the video are presented as country hicks with bad style and rotting teeth. They also misspell “homosexuality” on their protest signs.

The video includes caricatures of anti-LGBT protesters as screaming rednecks with cartoonish hair and tattered clothes, bearing signs such as “homosexuality is sin” and a misspelled “get a brain morans.”

The LGBTQ anthem “You Need to Calm Down,” glorifies the homosexual and transgender agenda with rainbow symbols, a gay wedding, drag queens, and a few cameos from some of the biggest celebrities in Hollywood.

The lyrics lecture those unsupportive of the homosexual lifestyle, demanding they “calm down.” The video’s message specifically targets Christians, portraying them as unclean and unintelligent.

In the video, anti-gay protesters can be seen holding signs that say, “Adam + Eve NOT Adam + Steve,” “Homosekualty is SIN,” and “Get a Brain Morans.” As for the lyrics, at one point Swift sings:

You are somebody that we don’t know, but you are coming at my friends like a missile. Why are you mad? When you could be GLAAD?”

(The official lyrics video spells the word “glad” with two A’s, a reference to the LGBT activist group.)

In a statement Swift discussed her latest music video:

I’ve observed a lot of different people in our society who just put so much energy and effort into negativity, and it just made me feel like, ‘You need to just calm down. Like, you’re stressing yourself out. This seems like it’s more about you than what you’re going off about. Like, just calm down.’

Swift is showing her support for the LGBTQ community. Back in April, she donated $113,000 to the Tennessee Equality Project. She also penned a letter to Sen. Lamar Alexander asking him to support the Equality Act and spoke about the bill during her performance at Wango Tango.

TMZ reports that since the June 14 release of the music video there has been an influx of donations to GLAAD, the Gay & Lesbian Alliance Against Defamation. In addition, GLAAD also started a Facebook fundraiser for fans to support the LGBTQ advocacy work for Pride month. 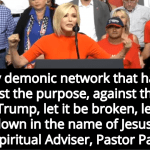 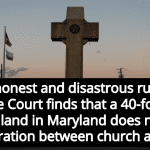 June 20, 2019 Supreme Court Rules Maryland’s 40-Foot Christian Cross Is Secular Symbol
Recent Comments
0 | Leave a Comment
"I am called a bigot, a fool, referred to as "my kind", "nigerian white supremacist ..."
MrPeach Texas Governor: ‘The Problem is Not ..."
"you sure can run your mouth here, now explain your downvote to my harmless comment. ..."
Joshua Booker Million MAGA March: Militias, Proud Boys, ..."
"now I see why you hide your name. Some TROLL in ya=== lol!"
Brian Carnevale Texas Governor: ‘The Problem is Not ..."
"The cowardly censor at FA banned me years ago.There was an uncensored Angry Atheist channel, ..."
Pablo.Dali Fox News Host Bill Hemmer Warns ..."
Browse Our Archives
get the latest from
Progressive Secular Humanist
Sign up for our newsletter
POPULAR AT PATHEOS Nonreligious
1