Say “Hello” to the American Taliban.

Alabama Gov. Kay Ivey has signed legislation permitting Briarwood Presbyterian Church to establish its own police force for its church and school campuses.

The law approved two weeks ago allows the Birmingham-based church to set-up a private law enforcement department to make arrests when crimes are committed on its properties.

Briarwood Presbyterian Church has been lobbying for their own police force for quite some time. In 2017 the Alabama Senate approved the fundamentalist Christian church police force but the legislation was never signed into law, and the bill was left to die the quiet death it deserved.

Noting that legal scholars found that the 2017 measure was unconstitutional, NPR reports:

A similar measure, first proposed four years ago, was dropped in 2017 after opponents argued that it grants government power to a religious institution in violation of the Establishment Clause.

Experts say a church with its own police department would be unprecedented in the U.S.

Critics worry embarrassing crimes like the sexual abuse of children and others, as well as illegal drug use, would be covered up by a police force loyal to the church rather than the law.

It’s making the church take the role of the government. I would expect that if the law is enacted it would not be very long before it is challenged.

Indeed, it seems certain that a church-only police force raises constitutional questions that would and should be subject to immediate legal challenge.

In addition to the fact that a Christian police force is an unconstitutional violation of the  Establishment Clause, this particular church, Briarwood Presbyterian Church, has a long and well documented history of racism, sexism, and homophobia.

The Root explains one aspect of the deplorable history of Briarwood Presbyterian Church:

Briarwood is one of the largest and most influential churches in the entire Bible Belt and has a long history of racism. In 1973, 260 churches with congregations totaling 41,000 members split from the Presbyterian Church in the United States and formed what would become the Presbyterian Church in America. Although the current PCA website attributes the split to PCUS’s “liberal theology,” the truth is, the mostly Southern congregations seceded from the larger PCUS after the PCUS decided that it would allow black and white parishioners to worship together.

And where did those church leaders meet to form this Confederate church?

Briarwood Presbyterian Church in Vestavia, Ala.

Since its founding, Briarwood has been notorious for continuing to root for everyone straight, white and male. Not only does it not allow women to have leadership roles as ministers or deacons, but the church’s history is also rife with racism and homophobia…

Responding to the new law, the ACLU of Alabama tweeted out the following message:

These attempts to undermine the separation of church and state are a threat to our freedom of religion and a violation of the Establishment Clause. We expect this law to be challenged in the courts. #alpolitics https://t.co/JaLA0Uhqwr

These attempts to undermine the separation of church and state are a threat to our freedom of religion and a violation of the Establishment Clause. We expect this law to be challenged in the courts.

Indeed, a fundamentalist Christian church, or any other church, having its very own police force is a terrifying prospect. More important, for a church to have its own police force is a slap in the face to the U.S. Constitution, and a terrible betrayal of the secular values upon which this nation was founded.

Bottom line: Alabama Governor Kay Ivey has signed a bill into law allowing  a fundamentalist Christian church to establish its own police force. 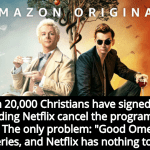 June 21, 2019 Trump Administration Argues Migrant Children Not Entitled To Soap, Toothbrushes, Beds
Recent Comments
0 | Leave a Comment
Browse Our Archives
get the latest from
Progressive Secular Humanist
Sign up for our newsletter
POPULAR AT PATHEOS Nonreligious
1

Whitewashing Christian History in The Reason for God
To hear Tim Keller talk, you'd think the Christian church was responsible...
view all Nonreligious blogs
What Are Your Thoughts?leave a comment
Copyright 2008-2021, Patheos. All rights reserved.
error: Content is protected !!