The following is a partial transcript of White’s remarks:

As our president often says and I’ve had the wonderful privilege of having an 18-year relationship with him and his family, he says ‘we worship God not government,’

I pray for the spirit of the Lord to rest upon our president and let your favor cause his horn, his power to be exalted according Psalm 89:17. Lord, your word says in Psalm 2:1-4, why do the nations conspire and the people plot in vain. The kings of the earth rise up and the rulers band  together against the Lord and against his anointed saying, let us break their chains and throw off their shackles … Father, you have raised President Trump up for such a time as this.

Pastor White has been a big Trump supporter and adviser from the beginning of Trump’s quest for political power, and was a featured speaker at the last presidential inauguration.

June 18, 2019
Televangelists: Christians Must Pray For Trump Because Democrats Will Make Bible Illegal
Next Post 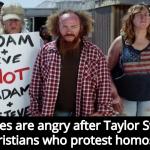