Holocaust denial: A Florida high school principal has been reassigned after claiming that he couldn’t say that the Holocaust was “a factual, historical event.”

The principal at a Florida high school is being reassigned to a position with the school district after revelations that he wrote emails to a parent that seemed to cast doubt on the historical veracity of the Holocaust.

Spanish River Community High School Principal William Latson was removed after an email exchange from last year with a parent was recently made public. In the exchange, Latson wrote:

Not everyone believes the Holocaust happened and you have your thoughts but we are a public school and not all of our parents have the same beliefs so they will react differently.

He went on to claim that as an educator he had “the role to be politically neutral but support all groups in the school,” adding:

I can’t say the Holocaust is a factual, historical event because I am not in a position to do so as a school district employee.

While it’s difficult to tell if Latson is simply an ignorant simpleton, or a nefarious conspiracy theorist, one thing is clear: this man has no business educating children.

In a statement explaining the decision to remove Latson, the School District of Palm Beach County said:

It is out of an abundance of concern and respect for the students and staff of Spanish River Community High School that School District Administration has decided to reassign Principal William Latson effective immediately.

Mr. Latson made a grave error in judgment in the verbiage he wrote in an email stating, “I can’t say the Holocaust is a factual, historical event because I am not in a position to do so as a school district employee.” In addition to being offensive, the principal’s statement is not supported by either the School District Administration or the School Board.

Bottom line: Spanish River Community High School Principal William Latson is out of a job because he refused to say the Holocaust was a real historical event. 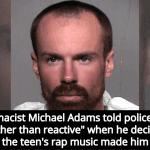 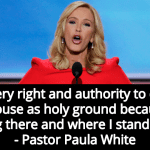 July 9, 2019 Trump Spiritual Adviser Paula White Claims She Made White House ‘Holy Ground’
Recent Comments
0 | Leave a Comment
"Just the pedophiles, of course. My comment was tongue in cheek in response to the ..."
Lauren Greene Christian Lawmaker Wants To Jail Librarians ..."
"If you are placing your children in positions of facing abuse or death in the ..."
Travis Brown 7-Year-Old Boy Killed While Being Punished ..."
"UH OH. It appears Disqus purged all activity from it's communities of which I was ..."
Joe M 😈 Christian Lawmaker Wants To Jail Librarians ..."
"Either homeschooled or attended one of the many too many "Christian" madrasahs in our land. ..."
duck Christian Terrorist Samuel Gulick Arrested For ..."
Browse Our Archives
Follow Us!