The turtle is a traitor: The deplorable Moscow Mitch McConnell is angry after being called out for being a Russian sympathizer so afraid of Trump he blocked legislation to secure national elections.

More on the story from The Hill:

The hashtag #MoscowMitchMcTreason began trending on Twitter Tuesday morning after Senate Majority Leader Mitch McConnell (R-Ky.) fired back against the nickname “Moscow Mitch” in a fiery speech from the Senate floor.

McConnell responded on Monday, decrying the attacks against him as “modern-day McCarthyism.”

After being rightly ridiculed in the media for his treason and slavish devotion to the Rapist in Chief, Senate Majority Leader Moscow Mitch McConnell stepped on the Senate floor to try to salvage his ruined reputation. An angry McConnell declared:

It started with the angry lies on MSNBC. The host lied and said that I’ve dismissed Russia’s interference in our 2016 election as, quote, a ‘hoax.’ Of course I’ve never said any such thing. A few hours later came the Washington Post column. It was authored by Dana Milbank, a pundit who spent much of the Obama Administration carrying water for its failed foreign policies and excusing President Obama’s weakness on Russia.

I was called unpatriotic, un-American and essentially treasonous by a couple of left-wing pundits on the basis of bold-faced lies. I was accused of aiding and abetting the very man I’ve singled out as an adversary and opposed for nearly 20 years, Vladimir Putin.

The Washington Post column that made Senate Majority Leader Mitch McConnell so angry was written by Dana Milbank, and published over the weekend. In the column Milbank correctly describes the Senate’s top Republican member as “a Russian asset,” noting:

This doesn’t mean he’s a spy, but neither is it a flip accusation. Russia attacked our country in 2016. It is attacking us today. Its attacks will intensify in 2020. Yet each time we try to raise our defenses to repel the attack, McConnell, the Senate majority leader, blocks us from defending ourselves.

The following is a sample of the reactions via Twitter:

If Mitch McTreason doesn’t wanna be called a traitor, then he should stop being one. #MoscowMitchMcTreason

It’s about time #MoscowMitchMcTreason is made to answer for what he did to #MerrickGarland and how he knew Russia was attacking us and he let it happen. History will remember him as a traitor and a grifter.

In January Mitch McConnell led the Senate to lift sanctions on Russian oligarch Oleg Deripaska, despite being implicated in 2016 election interference.

You upset that you’re trending for all the wrong (right) reasons?

How about you poke your head out of your shell and allow a bipartisan vote on Election Security?

And while you’re at it, why not stop being a TRAITOR, mkay?

Mitch McConnell blocks unanimous election security bills and when he gets called out, he claims he’s the victim of “modern day McCarthyism” by “a couple of left-wing pundits on the basis of bold-faced lies.” #MoscowMitchMcTreason #MoscowMitchIsCorrupt pic.twitter.com/0IZ9H01AVC

I like happy thoughts: puppies, sunrises, Mitch McConnell realizing the safe space of his bacteria infested shell won’t shield him from the consequences of committing active sabotage against America. Justice is dead until his three chins tremble in court. #MoscowMitchMcTreason

You’ve never stood up unless it’s to accept an award from fellow racists. #MoscowMitchMcTreason #MoscowMich pic.twitter.com/K5CLdhYHyp

Bottom line: The turtle is a traitor: Moscow Mitch McConnell is a Russian asset, and he is angry after being called out for being a Russian sympathizer so afraid of Trump he blocked legislation to secure national elections. 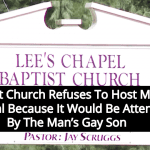 July 29, 2019
Baptist Church Refuses To Hold Funeral For Dying Man Because His Son Is Gay
Next Post 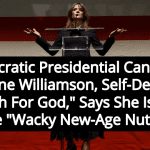