The Amazon is burning — and humans are likely to blame.

Environmental organizations and researchers say the wildfires blazing in the Brazilian rainforest were set by cattle ranchers and loggers who want to clear and utilize the land, emboldened by the country’s pro-business president.

The Amazon rainforests are on fire. Brazil’s Trump-like president, Jair Bolsonaro, is to blame.

The new Brazilian leader called himself “Captain Chainsaw” and mocked environmentalists who feared his pro-clearance policies could decimate the Amazon.

Indeed, Bolsonaro is a dangerous Christian fascist who has promised to remake Brazil into a Christian theocracy.

Vox reports Bolsonaro summed up his successful far-right presidential campaign with the slogan:

Indeed, a big part of Bolsonaro’s dream of a Christian theocracy entails the eradication of non-Christians, in particular, the indigenous peoples of Brazil currently making the Amazon rainforest their home.

Bolsonaro was inaugurated on New Year’s day 2019, and immediately began to set into motion his deplorable plans to remake Brazil into a Christian theocracy. In his acceptance speech, Bolsonaro promised to govern according to the Bible…

And at the top of his list was the extermination of uncontacted tribes, and the persecution of  indigenous groups.

And while the theft of  indigenous people’s lands could mean genocide, it also means profits. Think Progress notes:

His (Bolsonaro’s) far-right administration has empowered ranchers, loggers and farmers to clear land for their own benefit, destroying huge swathes of the rainforest in the process.

Bolsonaro is currently denying that he is responsible for the crisis in the rainforest. Instead, he blames NGOs for the fires consuming the Amazon.

On the question of burning in the Amazon, which in my opinion may have been initiated by NGOs because they lost money, what is the intention? To bring problems to Brazil

Bolsonaro is being dishonest, and engaging in wild conspiracy theories. NGOs are not burning down the rainforest. Full stop.

By encouraging the burning of the Amazon rainforests, Bolsonaro is committing #ecocide. It’s time this became an international crime, alongside other crimes against humanity. As the late, great @PollyHiggins argued. pic.twitter.com/Do3f8LdLts

Climate change is a global emergency. Bolsonaro and his corporate cronies are burning the Amazon rainforest for personal profit and jeopardizing our planet’s survival.

My #GreenNewDeal will impose climate sanctions against corporations that threaten our global climate goals. https://t.co/erZzHozviQ

1/ It cannot be exaggerated what a threat to the planet Jair Bolsonaro is. From the @washingtonpost: “Huge tracts of the Amazon, which serves as the lungs of the planet by taking in carbon dioxide, storing it in soils and producing oxygen, are ablaze.” https://t.co/xTwBDZi13e

The Amazon is on fire! The story should top headlines. If we have any hope averting the worst of the climate crisis we need a healthy Amazon rainforest. But Brazil’s right-wing President Bolsonaro encourages short-sighted exploitation at the expense of the health of the planet.

Bottom line: Bolsonaro is a Christian fascist with no respect for people or the environment. He is motivated by power, greed, bigotry, and religious superstition, and he is currently overseeing the destruction of the Amazon rainforest and the genocide of indigenous peoples.

Then God said, “Let Us make man in Our image, according to Our likeness; let them have dominion over the fish of the sea, over the birds of the air, and over the cattle, over all the earth and over every creeping thing that creeps on the earth.” – Genesis 1:26 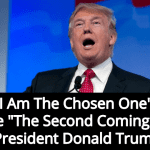 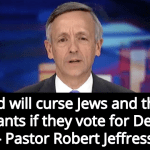