Rios, the American Family Association’s Director of Governmental Affairs and a popular defender of extreme conservative Christian values, suggested that criticism of white supremacy is criticism of Christianity while speaking on her radio program, “Sandy Rios in the Morning” on American Family Radio.

On her program Rios said:

It’s not about your skin color and when they go further and compare President Trump to Nazis and their white racism, it’s really silly because, remember, the Nazis killed thousands, hundreds of thousands, of people, but guess what? They were white. The Nazis were Aryan supremacists. They had a certain superhuman race they wanted to develop and most white people did not qualify.

It may seem as though the hatred is focused on the president, but as I have said to you before, it is really focused on us—those of us that love this country, even if you don’t support Trump fully but you love the Constitution, you love the founders, you believe in Jesus—you are an object of their wrath.

Rios is a big Trump supporter, and a virulent anti-LGBT activist who often spouts Christian hate speech to promote her prejudice and bigotry. Previously Rios made headlines by fantasizing about Hillary Clinton being a lesbian, and leading an attack on Target’s trangender-inclusive bathroom policy by sending men into women’s bathrooms.

In fact, the Southern Baptist Convention, the largest Protestant body in the United States, was founded upon the notion that black slavery and white supremacy was integral to the Christian faith.

And the Ku Klux Klan has always been, and remains, an exclusively Christian organization dedicated to white supremacy. 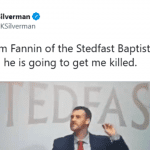 August 9, 2019
Florida Pastor Calls On God To Kill Comedian Sarah Silverman For Being ‘A Witch’
Next Post 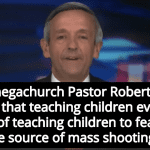 August 10, 2019 Megachurch Pastor Claims Teaching Children Evolution Causes Mass Shootings
Recent Comments
0 | Leave a Comment
"One of those medications used in treating attention deficit disorder is adderall . Adderall should ..."
leebrownmark@gmail.com Report: President Donald Trump Is An ..."
""Some of the ‘legitimate’ commenters, however, are amongst the best there are."Not buying it. Some ..."
alverant Fox News Host Bill Hemmer Warns ..."
"It’s become a bit of a magnet to RWs because Jonathan, quite deliberately, refuses to ..."
Geoff Benson Fox News Host Bill Hemmer Warns ..."
"Evil turns in upon itself."
Brianna LaPoint Pentecostal Christians Are Burning Australia’s Sacred ..."
Browse Our Archives
get the latest from
Progressive Secular Humanist
Sign up for our newsletter
POPULAR AT PATHEOS Nonreligious
1