Speaking on his radio show earlier this week, Peterson attacked Rep. Sean Duffy after the congressman announced he would resign his position to spend more time taking care of his family.

According to reports, Duffy’s wife, Fox News commentator Rachel Campos-Duffy, is pregnant with the couple’s ninth child – a child that will probably require open-heart surgery after being born.

However, for Peterson, the decision by Rep. Duffy to retire in order to spend more time taking care of his very large family, means that Duffy is “a beta male” being controlled by an over-educated woman.

On his radio show Peterson asked:

Why does she have to work? Why doesn’t she stay home, be a wife, a mother, and help raise the children? And now this guy has to step down because this baby apparently has some issues … He shouldn’t quit his job for that. I guarantee you she is making him do it.

This woman is a selfish, egotistical woman and this man is too beta male to make her do the right thing. This woman is a selfish woman. She has nine kids and she’s trying to be like a man, ‘I want to be seen by the world as such a working woman.’ Women, God has given you the gift of being the assistant of the man, to watch over his children, to make sure things are well at home, to be there when the kids come home, to cook, clean, provide in that way. There is no greater job for a woman than that. And I don’t know why these men would marry these women if they don’t have that mindset. It’s like being married to another man. It’s selfishness, it’s not love.

She has control over him. He’s a beta male. So Sean Duffy, Representative Duffy, you are a beta male! It’s ridiculous, really ridiculous, and it’s sad for the children. Nine children? You need to be home, and the man, you need to be out providing and being the light for your family … Men, you need to come back to your proper state of being so God can give you the right kind of woman to marry. I wouldn’t recommend you marry these educated women with these degrees; they don’t make for good wives and mothers.

Watch the ignorant rant below –

Peterson’s sexism and misogyny is transparent. The man is broken, and in serious need of help. His attempt to denigrate educated women fails, and serves only to reveal a stunning lack of character and intellect. 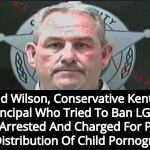 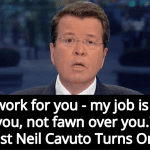 August 30, 2019 Fox Host Neil Cavuto Turns On Trump: ‘I Don’t Work For You’
Recent Comments
0 | Leave a Comment
"Makes me wish I could leave again... again."
mordred Cardinal Raymond Burke: God Says Gays ..."
"Climate varies all over the planet.Which contradicts what you said earlier. Go to bed."
Raging Bee Megachurch Pastor Preaches Climate Change Denial, ..."
"It should be obvious to y'all in the 21st C that I don't exist, and ..."
Gord O'Mitey Cardinal Raymond Burke: God Says Gays ..."
"https://www.encyclopedia.co..."
larry parker Megachurch Pastor Preaches Climate Change Denial, ..."
Browse Our Archives
get the latest from
Progressive Secular Humanist
Sign up for our newsletter
POPULAR AT PATHEOS Nonreligious
1