The stupids, it burns: Ohio Rep. Candice Keller blames mass shootings on Obama, gay marriage, drag queen advocates, video games, and recreational marijuana; but never once mentions guns, or the racist policies of the GOP and the White-Supreamcist-In-Chief.

In an obnoxious Facebook rant Republican lawmaker Candice Keller from Southwest Ohio complains about liberals playing the “blame game” after every mass shooting before placing the blame on almost everything except guns.

Keller, from Middletown, Ohio, a small city 30 miles south of Dayton, where a gunman killed nine on Sunday, wrote: 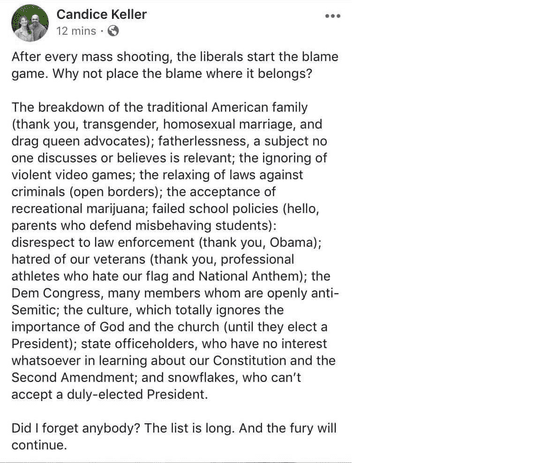 After every mass shooting, the liberals start the blame game. Why not place the blame where it belongs?

The breakdown of the traditional American family (thank you, transgender, homosexual marriage, and drag queen advocates); fatherlessness, a subject no one discuses or believes is relevant; the ignoring of violent video games; the relaxing of laws against criminals (open borders); the acceptance of recreational marijuana; failed school policies (hello parents who defend misbehaving students); disrespect to law enforcement (thank you, Obama); hatred of our veterans (thank you, professional athletes who hate our flag and National Anthem); the Dem Congress, many members whom are open anti-Semitic; the culture, which totally ignores the importance of God and the church (until they elect a President); state officeholders, who have no interest whatsoever in learning about our Constitution and the Second Amendement; and snowflakes, who can’t accept a duly-elected President.

Did I forget anybody? The list is long. And the fury will continue.

Keller was immediately condemned by many for her irresponsible and disturbing rant, and the Republican lawmaker later deleted the post from her Facebook page. But, by then, the damage was done, and now Keller is being asked to resign by Jane Timken, the head of the Ohio Republican party.

Ohio Republican Party leader Jane Timken has called on Rep. Candice Keller to resign from her Butler County seat after the lawmaker’s “shocking” comments about Sunday’s mass shooting in Dayton.

In a statement Timken said:

While our nation was in utter shock over the acts of violence in El Paso and Dayton, Republican State Representative Candice Keller took to social media to state why she thought these acts were happening. Candice Keller’s Facebook post was shocking and utterly unjustifiable. Our nation is reeling from these senseless acts of violence and public servants should be working to bring our communities together, not promoting divisiveness.

Bottom line: Ohio Rep. Candice Keller blames the “breakdown of the traditional American family” and “acceptance of recreational marijuana” for recent mass shootings, and now she is being asked to resign by the head of the Ohio Republican party. 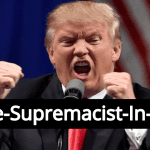 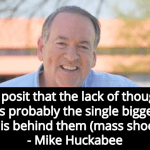 August 6, 2019 Mike Huckabee: 'Lack Of Thoughts And Prayers' Causes Mass Shootings
Recent Comments
0 | Leave a Comment
Browse Our Archives
get the latest from
Progressive Secular Humanist
Sign up for our newsletter
POPULAR AT PATHEOS Nonreligious
1