Taylor, a retired firefighter known as the “firefighter prophet,” is the author of the bestselling book, “The Trump Prophecies: The Astonishing True Story Of The Man Who Saw Tomorrow… And What He Says Is Coming Next,” which has been wildly successful with Trump-loving conservative Christians.

Speaking on the Sheila Zilinsky podcast Taylor explained that God had told him that patriots will assassinate high-profile Democrats if Trump does not begin making arrests of high profile Democrats.

On the podcast Taylor said:

What the Lord has shown me is that if they wait too long, it could be another Mogadishu or another Benghazi, where the patriots will rise up and say, ‘Enough is enough,’ and they will take matters into their own hands and they will drag their dead bodies through the streets. They will go to these politicians’ houses or offices and drag them out.

The people are not asking for justice, they are demanding it, so the government has to act. They need to make probably one or two high-level arrests, high-profile arrests, perp walk them on national television so that people will see that justice is going to be done. They have got to make the arrests before January if they are going to make them this year, because if [Trump] arrests anyone after January when campaign season starts, it’s going to make it look like he’s just arresting those that oppose him. So they have a window of time between now and the end of the year to make these arrests. That is what God has shown me as far as this timeline.

Previously Taylor has argued that  legal and safe abortion is a secret plot to provide human sacrifices for the demon god Baal.

In 2017 Taylor warned that “people who support reproductive rights do so only because they want to provide a human sacrifice to the demon god Baal,” declaring: 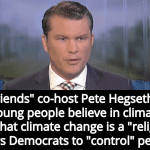 August 21, 2019 Cardinal Pell Loses Appeal Against Conviction For Sexually Abusing Children
Recent Comments
0 | Leave a Comment
Browse Our Archives
get the latest from
Nonreligious
Sign up for our newsletter
POPULAR AT PATHEOS Nonreligious
1