Anti-Semitism for Jesus and the GOP: Robert Jeffress, Texas megachurch pastor and one of Trump’s closest spiritual advisors, warns Jews that they and their children will be cursed by God if they vote for Democrats.

Jeffress made his over-the-top anti-Semitic remarks while making an appearance on Todd Starnes’ Fox News radio show. The two conservative Christians were trying to justify Trump’s recent claims that Jews who vote for Democrats are disloyal, and criticizing Democratic presidential hopeful Bernie Sanders for declaring:

I am a proud Jewish person, and I have no concerns about voting Democratic. And in fact, I intend to vote for a Jewish man to become the next president of the United States.

And the question he (Trump) is raising about how can American Jews support Democrats who support people like [Ilhan Omar and Rashida Tlaib], despicable representatives of our country who are antisemitic to the core, how can Jewish Americans support that?

It makes no sense for those Jewish Americans not to support a president and a party that stands for Israel like Donald J. Trump does…

… I mean it’s obvious Bernie Sanders is completely illiterate when it comes to what the Old Testament teaches about Israel.

Robert Jeffress says that Bernie Sanders is “completely illiterate when it comes to what the Old Testament teaches about Israel,” as are all Jews who vote for Democrats. pic.twitter.com/KeTtpHRTX9

In other words, Pastor Jeffress is claiming that God will curse Jews and their descendants if they vote for Democrats.

God has given Trump authority to take out Kim Jon-Un.

Bottom line: Robert Jeffress, Texas megachurch pastor and one of Trump’s closest spiritual advisors, claims that God will curse Jews and their descendants if they vote for Democrats. 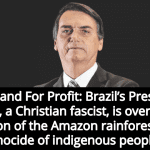 August 22, 2019
Brazil’s Christian Fascist Bolsonaro Is Burning Down The Amazon For Jesus And Profits
Next Post 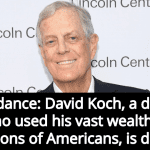