Good News: The city of San Francisco has passed a resolution calling the National Rifle Association a “domestic terrorist organization.”

The San Francisco Board of Supervisors passed a resolution on Tuesday declaring that the National Rifle Association is a domestic terrorist organization. The officials also urged other cities, states and the federal government to follow suit.

The resolution reads in part:

WHEREAS, The United States is plagued by an epidemic of gun violence, including over 36,000 deaths, and 100,000 injuries each year, and

WHEREAS, Every day approximately 100 Americans are killed with guns, and

WHEREAS, There has been more than one mass shooting per day in the United States in 2019, and

WHEREAS, The gun homicide rate in the United States is 25 times higher than any other high-income country in the world…

WHEREAS, The National Rifle Association musters its considerable wealth and organizational strength to promote gun ownership and incite gun owners to acts of violence, and

WHEREAS, The National Rifle Association spreads propaganda that misinforms and aims to deceive the public about the dangers of gun violence, and

WHEREAS, The leadership of National Rifle Association promotes extremist positions, in defiance of the views of a majority of its membership and the public, and undermine the general welfare, and

WHEREAS, The National Rifle Association through its advocacy has armed those individuals who would and have committed acts of terrorism…

RESOLVED, That the City and County of San Francisco intends to declare the National Rifle Association a domestic terrorist organization…

San Francisco’s Board of Supervisors on Tuesday took the step of officially declaring the nation’s premier gun-ownership advocates a terrorist organization.

District 2 Supervisor Catherine Stefani wrote the scathing declaration reading in part, “the National Rifle Association spreads propaganda that misinforms and aims to deceive the public about the dangers of gun violence.”

“The NRA has it coming to them, and I will do everything that I possibly can to call them out on what they are, which is a domestic terrorist organization,” said Stefani.

In fact, the NRA is a deplorable domestic terrorist organization that hides behind the Second Amendment and the interests of a small but vocal and threatening minority, while putting the vast majority of decent Americans in harm’s way.

Make no mistake, the NRA is a deadly and powerful terrorist organization.

Yet despite the relatively small numbers, the NRA terrorizes politicians and civilians alike.

As a nation we live with and tolerate a culture of gun violence. All the while any proposal to enact sensible reform to curb gun violence is squashed by the NRA and the multitudes of ammosexuals in love with their guns.

Indeed, the NRA and the gun lobby intimidates and bullies politicians, while spreading deception and misinformation to the general public. They are the equivalent of the 20th century tobacco lobby, merchants of death, terrorists claiming their product is safe while countless Americans die.

Bottom line: The city of San Francisco is right. The NRA is America’s premier domestic terrorist organization, and they need to be stopped. 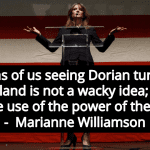 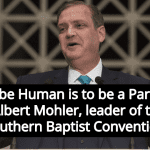 September 4, 2019 Southern Baptist Leader Claims You Must Have Children ‘To Be Human’
Recent Comments
0 | Leave a Comment
Browse Our Archives
get the latest from
Progressive Secular Humanist
Sign up for our newsletter
POPULAR AT PATHEOS Nonreligious
1