Bashing liberals for Jesus: While discussing climate change a Fox News panel concludes that liberals have “forgotten about God” and are “worshipping the environment instead.”

Fox News segment Thursday about climate change turned into harsh criticism of liberals and 16-year-old climate change activist Greta Thunberg. The panel said liberals have replaced religion with climate change, have “forgotten about God” and are “worshipping the environment instead.”

The segment aired during Fox News’ daytime talk show Outnumbered, which features four female panelists and “#OneLuckyGuy,” according to the show’s website. Thursday’s “lucky guy” was conservative pundit Buck Sexton, who said the Democratic presidential candidates’ response to climate change, with some suggesting a ban on straws and to eat less red meat, wouldn’t work with the American electorate. He then pivoted his argument to liberals.

Appearing on the Fox News’ show Outnumbered, conservative pundit Buck Sexton used his platform on Fox to bash liberals by suggesting that “climate change is a religious belief.” Sexton declared:

Climate change is a religious belief for people who think they’re too smart for religion.

Melissa Francis, one of the programs co-hosts, was quick to agree with Sexton, making a comparison of Catholicism to environmentalism:

They’ve got Catholic guilt and they’re going to confession. But they just have forgotten about God, so they’re worshiping the environment instead.

Francis continued on her rant, suggesting that school children are being indoctrinated with environmentalism instead of religion:

You see it in kids with school. One of my kids, their class said that their motto was ‘Treat myself well, treat my friends well, respect the environment.’ And I was like, that’s ‘Love your neighbor as yourself and God above all things.’ It’s the same thing, you just replace who’s in there.

Of course what all these Fox News conservatives fail to note is that climate change happens to be real, while God is not.

Bottom line: While discussing climate change a Fox News panel concludes that liberals have “forgotten about God” and are “worshipping the environment instead.” 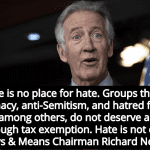 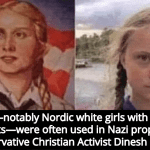