Child Mutilation for Jesus: Devout Christian Martina Obi-Uzom will spend no time in jail after she posed as the mother of an 11-month-old boy in order to have the child circumcised against the parents’ wishes.

A devout Christian pharmacist posed as the mother of a young boy to have him circumcised against his parents’ wishes, a court heard.

Martina Obi-Uzom, 70, took the child to a Jewish mohel, trained in the procedure, for the operation.

Obi-Uzom was accompanied by a male friend and filled in a consent form, duping the mohel into believing they were the boy’s parents.

A pharmacist who posed as the mother of an 11-month-old boy so he could be circumcised without his parents’ consent has been spared jail.

Martina Obi-Uzom, 70, was entrusted to look after the child while his parents were away over the weekend of September 2 to 3, 2017.

She used the opportunity to travel to London and employ the skills of a Jewish mohel – a Jew trained in the practice of circumcision – to get the child circumcised, determined he conform to her Nigerian Christian beliefs.

After being found guilty by a jury of causing grievous bodily harm to the boy, the “good Christian woman” was sentenced to fourteen months imprisonment. However, because of a morally incompetent judge, the criminal will serve no jail time.

At the time of sentencing Judge Freya Newbery told the child abusing Christian and convicted criminal the following:

You imposed your will, ignoring the mother’s objections to the circumcision and as the boy’s father describes it was a massive violation.

Circumcision can only be lawful with the consent of parents.

There is high culpability here, plus the vulnerability of the boy and this was planned and carefully organised.

You acted quickly to bring into effect your will, using the deceit that I have found you have.

It was an arrogant, imperious decision for what you wanted in place of the mother. It was a serious breach of trust.

‘The probation officer you spoke to found the offence was controlling and manipulative on your part.’

However, while Judge Newbery acknowledged that the offence merited a prison sentence, she said there were circumstances that allowed her to suspend it.

You have a Christian belief in circumcision that has great cultural and religious significance to you.

I accept your intention in your mind wasn’t to harm the boy and you are a woman of impeccable character.

You have worked in the community promoting the needs of less fortunate children. You are a professional person, a pharmacist, highly qualified and devoted to your family.

Impeccable character? The woman kidnapped and mutilated a child. Commenting on this travesty of justice, the National Secular Society notes:

It will strike many people as bizarre to describe a woman who took a baby in her care to have his genitals cut in defiance of his mother’s wishes, and used highly deceitful means to do this, as of “impeccable character”.

It will also strike many people as irrelevant that she is a “highly qualified”, “professional” person; why should one’s education and occupation entitle someone to leniency in such a case? It could be argued that Obi-Uzom’s profession — a pharmacist — means she should have known better. Her high level of education, which would involve specialist knowledge in healthcare, means she is in a better position to understand the harms and risks of circumcision than the average person, not to mention the ethics surrounding parental and patient consent.

The fact that Obi-Uzom kidnapped and mutilated a child in the name of ignorance and religious superstition is horrific. The fact that she will serve no jail time because a misguided and profoundly incompetent judge has sympathy for this “good Christian woman” who mutilates children only adds insult to injury.

Bottom line: Martina Obi-Uzom kidnapped and mutilated a child, but will serve no jail time because Judge Freya Newbery respects the criminal’s “Christian belief in circumcision,” claiming that it has “great cultural and religious significance.” 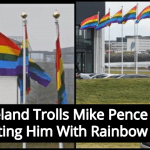 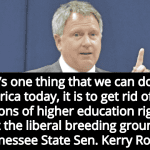 September 10, 2019 GOP Lawmaker Wants To End Higher Education To ‘Save America’ From Liberals
Recent Comments
0 | Leave a Comment
Browse Our Archives
get the latest from
Progressive Secular Humanist
Sign up for our newsletter
POPULAR AT PATHEOS Nonreligious
1