That Jesus-chicken tastes like Christian-hate: Chick-fil-A’s first location in the U.K. is being forced to close after residents became aware of the fast food chain’s deplorable record supporting anti-gay Christian-hate groups.

Chick-fil-A opened its first location in the United Kingdom in early October.

A little more than a week later, the British shopping center leasing the location has already said it will not extend the restaurant’s six-month lease, BBC reported Friday.

A US fast-food chain will cease trading at its first UK outlet amid a row over donations to anti-LGBT groups.

Gay rights campaigners called for a boycott of Chick-fil-A, which opened its first branch at The Oracle shopping centre in Reading on 10 October.

A spokeswoman for the centre said “the right thing to do” was to not extend the restaurant’s lease beyond the “six-month pilot period”.

In a statement, the Oracle Shopping Center said:

We always look to introduce new concepts for our customers, however, we have decided on this occasion that the right thing to do is to only allow Chick-Fil-A to trade with us for the initial six month pilot period, and not to extend the lease any further.

There is good reason why good people in the U.K. would reject Chick-fil-A. Earlier this year it was revealed that the southern-style chicken sandwich franchise and a self-identified Christian company gave over $1.8 million to anti-gay Christian hate groups in 2017.

Bottom line: Chick-fil-A’s first location in the U.K. is being forced to close because that Jesus-chicken tastes like Christian-hate. 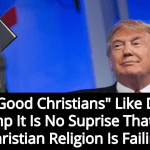 October 17, 2019
Report: Decline Of Christianity Continues At ‘Rapid Pace’ In U.S.
Next Post 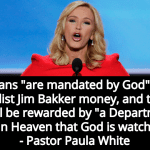 Thanksgiving: What Is Most Important
Captain Cassidy grew up fervently Catholic, converted to the SBC in her...
view all Nonreligious blogs
What Are Your Thoughts?leave a comment
Copyright 2008-2020, Patheos. All rights reserved.