A Tennessee county commissioner made polarizing comments during a Monday meeting, which led to some being outraged while others applauded his comments.

At the meeting, Commissioner Hurst complained that the Democrats had “a queer running for president,” referring to presidential hopeful Pete Buttigieg.

Hurst also lamented the fact that “a white male in this country has very few rights.”

I’m not prejudiced. A white male in this country has very few rights and they’re getting took more every day.

NEW: “We got a QUEER running for President… the white man has very few rights.”

In response to Hurst’s deplorable remarks, one angry woman walked out, declaring:

Excuse me, this is not professional. This is bullsh*t.

However, many in the crowd applauded Hurst’s racist, homophobic, hate-filled rant, with some adding an approving, audible, “Amen.”

The statements made by Commissioner Hurst at the Sevier County Commission meeting of October 21, 2019, do not reflect the opinion or position of Sevier County administration. Sevier County is an Equal Opportunity Employer and does not discriminate based on race, color, religion, sex, national origin, age, disability, or status in any other group protected by law.

As one might imagine, many are calling for Hurst’s resignation. However, Hurst says that he stands by his comments, and he is entitled to his opinion.

Bottom line: While speaking at a county commission meeting Monday evening, Tennessee County Commissioner Warren Hurst complained that the Democrats had “a queer running for president,” while lamenting the fact that “a white male in this country has very few rights.” 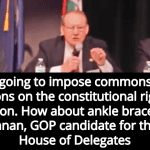 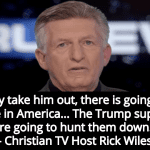 October 23, 2019 Christian TV Host: ‘There Is Going to Be Violence’ If Trump Is Removed From Office
Recent Comments
0 | Leave a Comment
Browse Our Archives
get the latest from
Nonreligious
Sign up for our newsletter
POPULAR AT PATHEOS Nonreligious
1