Stochastic terrorism: A disturbing and violent video depicting Trump shooting and killing journalists and Democrats was shown to supporters at a private campaign event at Trump’s resort in Miami.

A video depicting a macabre scene of a fake President Trump shooting, stabbing and brutally assaulting members of the news media and his political opponents was shown at a conference for his supporters at his Miami resort last week, according to footage obtained by The New York Times.

The video shows Trump’s face superimposed on the secret agent played by Colin Firth in the film Kingsman: The Secret Service. In the video, set in the fictional “Church of Fake News,” Trump is seen shooting, stabbing, and assaulting people with the logos of organisations such as CNN, BBC, Buzzfeed, Washington Post, Politico, and Black Lives Matter on their heads. In addition, in the video Trump slaughters people with the faces of Barack Obama, Mitt Romney, Bernie Sanders, John McCain, and Hillary Clinton.

The violent video is a clear example of stochastic terrorism – “the use of mass public communication, usually against a particular individual or group, which incites or inspires acts of terrorism…”

Commenting on the vile and deplorable video, CNN notes:

Sadly, this is not the first time that supporters of the President have promoted violence against the media in a video they apparently find entertaining — but it is by far and away the worst. The images depicted are vile and horrific,” CNN said in a statement Sunday night.

The President and his family, the White House, and the Trump campaign need to denounce it immediately in the strongest possible terms. Anything less equates to a tacit endorsement of violence and should not be tolerated by anyone.

As one might imagine, the video was widely condemned on social media. The following is a sample of reactions via Twitter:

5. As much as I hate to post this, given how much people are talking about this story, and that it involves the president’s club, his supporters, and an organization that supports him, here’s the video in question: pic.twitter.com/qqtllitsIP

Reports describing a violent video played at a Trump Campaign event in which images of reporters & @JohnMcCain are being slain by Pres Trump violate every norm our society expects from its leaders& the institutions that bare their names. I stand w/ @whca in registering my outrage

I’m watching the insane trump killing people video that aired at an event his son spoke at and let me say two things—one OMG and two he shoots PBS. The president shoots the public broadcasting service, home of Sesame Street and NOVA.

The #trumpvideo is a form of terror. They will say: it’s a joke, Trump wouldn’t kill journalists, we are perverse to think they condone a church mass murder, laugh a little. We are meant to doubt its literalnsss.

But we aren’t the audience. They know that. #StochasticTerrorism https://t.co/cteRDbTXDW

Waiting for Donald Trump to condemn the video of him committing mass murder that was shown at his resort to his supporters, and to apologize to the families of those targeted. #trumpvideo https://t.co/U4M2ukY5sE

The video played at pro-Trump event at Mar-A-Lago shows Trump punching Maxine Waters in the face as well as killing Barack Obama – I can only imagine for Trump’s base images of him killing powerful black people really play well. This is the cancer that is Trumpism. #TrumpVideo

So this is the #TrumpVideo.

His supporters have been shooting up synagogues and mosques for no reason.

We need to get this scourge out of office.#ImpeachmentIsComing #ITMFA
pic.twitter.com/3URcoclREI

Bottom line: In a clear incitement to violence, Trump supporters release a violent video showing Trump killing journalists and political opponents, and play the video at a Trump campaign event. 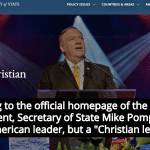 October 14, 2019 U.S. State Department Homepage Promotes Pompeo As ‘Christian Leader’
Recent Comments
0 | Leave a Comment
"They're blaming the Democrats for banning Dr Seuss and posting warnings about Sesame Street etc.Of ..."
Jim Jones Fox News Host Bill Hemmer Warns ..."
"I agree, but the question is a translation issue, not an interpretation issue so my ..."
Kit Hadley-Day Ana Kasparian’s Glorious Rant On Christianity ..."
"“the authority depends on the topic” ----- Yes. And the topic here is what the ..."
Mark Bradshaw Ana Kasparian’s Glorious Rant On Christianity ..."
"IKR, there's not often such a long pause between posts. I hope PSH is all ..."
alverant Fox News Host Bill Hemmer Warns ..."
Browse Our Archives
get the latest from
Progressive Secular Humanist
Sign up for our newsletter
POPULAR AT PATHEOS Nonreligious
1