Trump’s Spiritual Adviser: ‘To Say No To President Trump Would Be Saying No To God’

Trump’s Spiritual Adviser: ‘To Say No To President Trump Would Be Saying No To God’ October 9, 2019 Michael Stone

Complete Christian Corruption: President Donald Trump’s spiritual adviser, Pastor Paula White, claims that “to say no to President Trump would be saying no to God.”

Right Wing Watch reports via Twitter that Pastor White says she was ordered by God to serve President Trump:

Pastor Paula White claims that she was ordered by God to serve as an adviser to Trump: “To say ‘no’ to President Trump would be saying ‘no’ to God, and I won’t do that.” pic.twitter.com/7Z7uH4aneT

Explaining why she was compelled to serve as chair of Trump’s evangelical advisory board, White said:

Literally, the God aspect, like, what God told me to do, how I even got involved, because the one thing that I said, ‘I’ll never do politics.’ But when it came down to it, it wasn’t about doing politics, it was about an assignment. To say no to President Trump would be saying no to God, and I won’t do that.

White, like her friend Trump, is a con artist preying on the gullible and the ignorant. Last June White made the absurd claim that “demonic networks” have aligned themselves against the President’s reelection campaign. 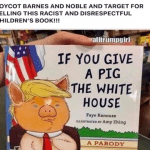 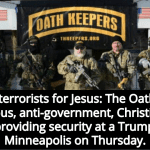