Theocracy at the State Department: In a deplorable development the homepage of the U.S. State Department is currently displaying an image of Secretary of State Mike Pompeo with the caption “Being a Christian leader.”

Is separation of church and state dead?

The website of the U.S, Department of State currently features a photograph of Secretary of State Mike Pompeo and the words, “Being a Christian Leader.”

The link on the State Dept. homepage goes to a video and the text of Pompeo’s speech to the American Association of Christian Counselors in Nashville, Tennessee on October 11.

According to the official homepage of the U.S. State Department, Secretary of State Mike Pompeo is not an American leader, but a “Christian leader.” As such, Muslims, Jews, atheists, and other non-Christians are treated as second class citizens.

This is not the first time Pompeo has abandoned the secular values upon which this nation was founded to promote ignorance and religious superstition. In fact, Pompeo has a well deserved reputation as a dangerous Christian extremist.

For example, an alarming video recorded in 2015 shows Pompeo discussing the Rapture. In the video Pompeo expresses his opposition to same-sex marriage while addressing a church congregation. And at one point in the video Pompeo declares:

Indeed, Pompeo has even gone so far as to endorse the notion of a “Holy War” between Christians and Muslims, and believes the fight against terrorism is a war between Islam and Christianity.

And last March Pompeo suggested that God sent President Donald Trump to Earth to save Israel and protect the Jews, claiming that Trump is a possible Queen Esther, poised to defend Israel and save the Jews from Iran.

Bottom line: With no respect for separation of church and state, the U.S. State Department is currently promoting the Christian religion by displaying an image of Secretary of State Mike Pompeo with the caption “Being a Christian leader.” 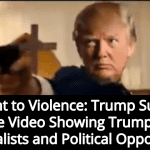 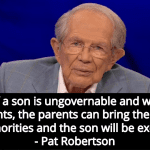