Former Virginia high school teacher Peter Vlaming has filed a lawsuit after being fired for repeatedly refusing to use appropriate pronouns when addressing a transgender student.

Vlaming, a former French teacher at West Point High School, about 40 miles east of Richmond, Virginia, was fired from his teaching position last year because he repeatedly refused to use a transgender student’s preferred pronouns. Instead, Vlaming repeatedly bullied the student by misgendering him in the classroom.

Now the conservative Christian has filed a lawsuit, claiming that using the student’s preferred pronouns would have violated his religious beliefs.

Peter Vlaming, who was a French teacher at West Point High School, said he was fired because he would not use pronouns such as “him” and “his” to refer to a female student who was transitioning to male.

According to the suit filed Monday in King William County, using the male pronouns would have “violated” Vlaming’s “conscience” and went against his religious beliefs, so he called the student by his preferred name during class and avoided using pronouns altogether.

The former teacher is now suing the school district officials, saying they breached his contract and discriminated against him, violating his right to speak freely and his religious freedom. He is seeking $500,000 in lost wages and benefits, plus $500,000 for loss of reputation, pain, suffering and emotional distress. He is asking to get his job back or another position at equal or higher pay.

Mr. Vlaming’s conscience and religious practice prohibits him from intentionally lying, and he sincerely believes that referring to a female as a male by using an objectively male pronoun is telling a lie.

Are we expected to believe that the cruel religious bigot who believes in lies like the virgin birth, the resurrection, heaven and hell, is really worried about “telling a lie.” What irony.

According to reports, while teaching at the school, Vlaming repeatedly misgendered a female-to-male transgender student by refusing to use his preferred pronouns. Instead, the cruel bully insisted on referring to the male student with female pronouns.

After repeated warnings, Vlaming was disciplined. and eventually fired. Late last year the West Point School Board voted unanimously to terminate Vlaming. At the time Superintendent Laura Abel said she agreed with the decision. In a statement Abel said:

The School Board has policies that prohibit discrimination on the basis of gender identity. As detailed during the course of the public hearing, Mr. Vlaming was recommended for termination due to insubordination through his repeated refusal to comply with directives made to him by multiple West Point Public Schools administrators. As superintendent, it is my responsibility to enforce board policy, and due to Mr. Vlaming’s non-compliance I therefore recommended termination.

Vlaming tried to defend his cruelty and bigotry by claiming religious reasons prevented him from referring to the student as male. In an online petition in support of Vlaming, the teacher is quoted as saying:

I won’t use male pronouns with a female student that now identifies as a male though I did agree to use the new masculine name but avoid female pronouns. Administration is requiring that I use masculine pronouns in any and every context at school. I was informed that any further instances of using female pronouns would be grounds for termination.

Citing his devout Christian faith in trying to defend his deplorable conduct at the time of his termination, Vlaming, reading from a prepared statement, told the school board:

We are here today because a specific worldview is being imposed on me. Even higher than my family ranks my faith.

For the record, no “worldview” was being imposed on Vlaming. All that was being asked was that he treat his student with the respect and dignity that every student is entitled to. But Vlaming, because of his devout and extreme Christian faith, could not even meet these minimal requirements for being a decent human being.

Bottom line:  Peter Vlaming should have been fired for bullying a transgender student, and he was. His lawsuit is without merit, and should be dismissed. Christian bigotry and ignorance should have no place in a public school, and religious superstition is never a justification for cruelty and bullying. 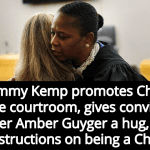 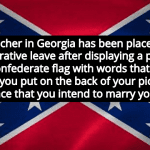 October 4, 2019 Georgia Teacher Tells Students Confederate Flag Means ‘You Intend To Marry Your Sister’
Recent Comments
0 | Leave a Comment
Browse Our Archives
get the latest from
Progressive Secular Humanist
Sign up for our newsletter
POPULAR AT PATHEOS Nonreligious
1