Deplorable: Christian rapper T.I. says he takes his daughter to the gynecologist once a year to have her hymen checked to make sure she is a virgin.

Rapper and actor T.I. said in a podcast interview that aired Tuesday that he goes with his 18-year-old daughter to the gynecologist every year to “check her hymen” and make sure it’s “still intact.”

Musical artist T.I. proudly admitted he accompanies his 18-year-old daughter, Deyjah Harris, to gynecologist appointments, so that he can ask the doctor directly to “check her hymen.”

T.I. said in a new interview that he accompanies his daughter every year for her annual gynecological exam to ensure she is still a virgin.

The rapper, whose real name is Clifford Joseph Harris, Jr., made the bizarre admission on the “Ladies Like Us” podcast on Wednesday regarding his daughter, Deyjah Harris.

Speaking on the “Ladies Like Us” podcast T.I. commented on his unusual and destructive relationship with his teen daughter:

Deyjah’s 18, just graduated high school now and she’s attending her first year of college, figuring it out for herself. And yes, not only have we had the conversation [about sex], we have yearly trips to the gynecologist to check her hymen.

I will say as of her 18th birthday, her hymen is still intact.

Talking to your daughter about sex is healthy. However, taking your daughter to a doctor to check the status of her hymen is despicable, and reflects the most vile and base misogynistic impulses. Impulses that seem to come natural to religious extremists.

And, of course, T.I. happens to be a conservative Christian. Indeed, the Christian rapper is a “devout Southern Baptist” who apparently treats his daughter like livestock, while publicly and privately humiliating her with his disgusting sexism.

The Hollowverse reports on T.I.’s Christianity:

T.I. is a Christian, a Southern Baptist to be exact. He regularly attends the New Birth Missionary Baptist Church in Atlanta. While he doesn’t express his devotion much outside of his music, T.I. seems to be quite devout… Rumor has it, T.I. may be considering becoming a preacher.

T.I. was happy to explain his abusive treatment of his daughter:

This is what we do… Usually, like the day after the [birthday] party, she’s enjoying her gifts. I put a sticky note on the door: ‘Gyno. Tomorrow. 9:30.’

He’s like, ‘Well, you know sir, I have to, in order to share information’ — I’m like, ‘Deyjah, they want you to sign this… so we can share information. Is there anything you would not want me to know?’ ‘See doc? No problem.’

So then they come and say, ‘Well, I just want you to know that there are other ways besides sex that the hymen can be broken, like bike riding, athletics, horseback riding, and just other forms of athletic physical activity. So I say, ‘Look doc, she don’t ride no horses, she don’t ride no bike, she don’t play no sports. Just check the hymen please and give me back my results expeditiously.’

In short, this broken and failed human being reduces his daughter’s worth to the status of her hymen. Christian rapper T.I. treats his daughter like property to be monitored for use.

However, while T.I. is desperately concerned with his daughter’s virginity, he doesn’t feel the same way about his son’s sexual activity, noting:

I don’t want any of my children to have sex before it’s time for them, but who’s to say when it’s time?

However, I will definitely feel different about a boy than I will about a girl. And that’s just the God’s honest truth.

Remember, sexism and misogyny is a feature, not a bug, of conservative Christianity.

Bottom line: Christian rapper T.I. says he takes his daughter to the gynecologist once a year to have her hymen checked to make sure she is a virgin. 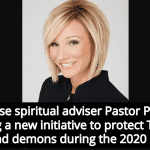 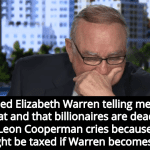 November 7, 2019 Elizabeth Warren’s Wealth Tax Makes Billionaire Leon Cooperman Cry
Recent Comments
0 | Leave a Comment
"I am called a bigot, a fool, referred to as "my kind", "nigerian white supremacist ..."
MrPeach Texas Governor: ‘The Problem is Not ..."
"you sure can run your mouth here, now explain your downvote to my harmless comment. ..."
Joshua Booker Million MAGA March: Militias, Proud Boys, ..."
"now I see why you hide your name. Some TROLL in ya=== lol!"
Brian Carnevale Texas Governor: ‘The Problem is Not ..."
"The cowardly censor at FA banned me years ago.There was an uncensored Angry Atheist channel, ..."
Pablo.Dali Fox News Host Bill Hemmer Warns ..."
Browse Our Archives
get the latest from
Progressive Secular Humanist
Sign up for our newsletter
POPULAR AT PATHEOS Nonreligious
1