Ernst blocked the vote on VAWA “because of a provision that eliminated the so-called boyfriend loophole by expanding a current ban on firearm purchases for spouses or formerly married partners convicted of abuse or under a restraining order to include dating partners who were never legally married.”

Sen. Dianne Feinstein (D-Calif.) tried to get consent to vote on the House-passed VAWA bill by the end of the year, including allowing both sides to offer two amendments.

But Sen. Joni Ernst (R-Iowa)… objected to setting up the vote on the bill…

This bill is not a Democratic bill. It’s not a Republican bill. This bill is a survivors’ bill. It’s written with the help of survivors who know what’s needed in the real world.

Calling Ernst out for her opposition to the legislation, Senator Chuck Schumer said:

Ask Sen. Ernst if she believes a boyfriend of a woman who has gotten a protection order issued against him should get a gun? Sen. Ernst evidently believes yes, because in the bill she’s putting forward it doesn’t have that provision even if it did in the House.

Schumer went on to advise Ernst that she should push Majority Leader Mitch McConnell “to bring the House-passed bill on the floor and we’ll debate it. And we can debate her amendment, which the gun lobby wants but almost no other American wants.”

As for Ernst, who has said she was raped in college and alleged that she suffered abuse at the hands of her ex-husband, she is preparing to offer a watered-down version of the Violence Against Women Act that would please the NRA and religious conservatives, but ultimately fail the women it is meant to serve.

Indeed, Ernst is a dangerous religious extremist who believes citizens should depend on churches, not government, for assistance. In addition to weakening the Violence Against Women Act, Ernst also wants to deny women the right to reproductive freedom and force poor and indigent people to attend church to receive any assistance rather than receiving public assistance from the government.

Previously, The Washington Post reported that Ernst wants to eliminate the federal Department of Education and  privatize Social Security.

Bottom line: Iowa Senator Joni Ernst, serving the interests of religious conservatives and the NRA, blocks the reauthorization of the Violence Against Women Act.

The Republican War on Women continues. 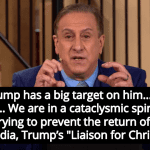 November 22, 2019
Christian Prophet: If You Oppose Trump You Are Preventing ‘The Return Of Christ’
Next Post 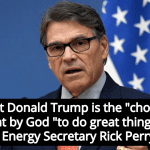 November 25, 2019 Rick Perry: Trump Is ‘Chosen One’ Sent By God To Rule Over United States
Recent Comments
0 | Leave a Comment
Browse Our Archives
get the latest from
Progressive Secular Humanist
Sign up for our newsletter
POPULAR AT PATHEOS Nonreligious
1