After a photo emerged of Kavanaugh and Alito meeting with Brian Brown, the president of the National Organization for Marriage (NOM) and the World Congress of Families, a Christian hate group, the justices are being asked to recuse themselves from LGBT rights cases.

The director of a judicial activist group has written U.S. Supreme Court Justices Brett Kavanaugh and Samuel Alito a letter demanding they recuse themselves from upcoming Supreme Court cases concerning LGBT rights, after the pair posed for pictures with the president of anti-gay group National Organization for Marriage (NOM).

NOM advocates for what they claim is “traditional marriage,” and hope to take marriage rights away from same sex couples. The group’s president is Brian Brown, who boasted of a “great day at the US Supreme Court” when posting the contentious photo to his Twitter account on October 29.

Brown is also the president of the World Congress of Families, which has been designated a hate group by the Southern Poverty Law Center.

As a result of that meeting and the social media photo, the legal activist group Take Back the Court is calling on Justices Kavanaugh and Alito to recuse themselves from LGBT rights cases. In the letter, Aaron Belkin, Director of Take Back the Court, writes:

I write today to request that you recuse yourself from three cases currently pending before the Court in light of serious concerns about your impartiality raised by your decision to pose for a photograph for social media with the leader of an organization that has filed amicus briefs in those cases.

… The successful and unprecedented efforts by political branches to manipulate the size of the court for partisan purposes and your behavior, Justice Kavanaugh, during your confirmation hearings, have only deepened concerns about the politicization of the court. Your decision to meet privately with an activist who has filed amicus briefs with the court in three pending cases seems to confirm the worst fears of his critics.

… The credibility and impartiality of the current Supreme Court is in tatters. Posing for photographs with the president of an advocacy organization that has filed briefs in matters pending before the court makes a mockery of Chief Justice Roberts’ assertion that a judge’s role is to impartially call balls and strikes.

Commenting on the story Quartz notes:

While the justices might not necessarily be swayed by anything Brown said when they all hung out, and they probably didn’t discuss their upcoming decision, the mere fact of the meeting casts doubt on their impartiality. And the appearance of fairness, the sense that litigants have a fair chance in court, is key to public confidence in the legal system. That’s why US Code Section 455 provides that “[a]ny justice, judge, or magistrate judge of the United States shall disqualify himself in any proceeding in which his impartiality might reasonably be questioned.”

In short, if nothing else the photo and the private meeting demonstrate a clear appearance of favoritism towards Brown and his anti-gay agenda rooted in Christian hate. As such, the impartiality of both Alito and Kavanaugh “might reasonably be questioned,” and thus both should disqualify themselves from the current cases in front of the court dealing with LGBT rights.

Bottom line:  The credibility and impartiality of Supreme Court Justices Brett Kavanaugh and Samuel Alito are is in doubt after meeting with prominent anti-LGBT leader and promoter of Christian hate Brian Brown. 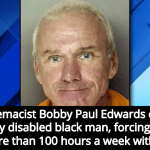 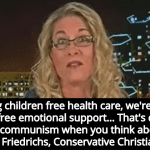 The Two Factions Forming in the...
Roll to Disbelieve
Related posts from Progressive Secular Humanist