Two  birds, one stone: Robert Jeffress, Texas megachurch pastor and one of Trump’s closest spiritual advisors, claims that the effort to impeach Trump is really “an effort to impeach our own deeply held faith values.”

Jeffress made his claim earlier this week while appearing on the Fox Business Network program  “Lou Dobbs Tonight.”

Evangelical pastors like yourself have influence over millions of parishioners. I’m just wondering when the time comes … are you going to preach from the pulpit that your members should go out and lobby for the President?

Look, we’re going to talk about lobbying for those values that the President embraces. And you know, Tuesday, David, when we met with the President, one of the things we talked about was that 99 percent — a recent poll showed 99 percent of evangelical Republicans oppose impeachment, and the reason for that is very clear: never in the history of America have we had a president who was a stronger warrior for the Judeo-Christian principles upon which this nation was founded than in President Donald J. Trump.

Jeffress is no stranger to controversy. Earlier this year, this “good Christian” man warned Jews that they and their children would be cursed by God if they voted for Democrats.

And last month Jeffress made the ridiculous claim that climate change is an “imaginary crisis” because God’s rainbow means “that the polar ice caps aren’t going to melt and flood the world again.” 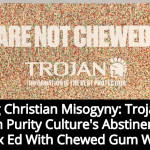 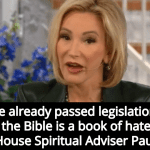