Because of course he did: Bishop Nicholas DiMarzio, the man selected by Pope Francis to investigate clerical sexual abuse in New York, repeatedly sexually assaulted an 11-year-old altar boy in Jersey City in the 1970s.

The head of the Brooklyn Diocese — whom the pope named to investigate allegations of clergy sex abuse upstate — has now been accused of the same crimes.

Bishop Nicholas DiMarzio repeatedly molested Mark Matzek, now 56, when Matzek was an altar boy at St. Nicholas Church and a student at St. Nicholas School in Jersey City between approximately 1974 and 1975…

Bishop Nicholas DiMarzio, who was recently chosen to lead an inquiry into clergy abuse in Buffalo, faces an accusation of molesting an altar boy in Jersey City in the 1970s.

For his part, Bishop DiMarzio denies he did anything wrong.

The story is sad, yet not surprising. We have known for decades that the Catholic Church is protecting and enabling pedophile priests. We have also known for decades that the church has made considerable efforts to deny the charges, always trying to deny and push accusations under the rug, often by re-victimizing the children raped and sexually abused by priests in the first place.

Yet despite overwhelming evidence that the Catholic Church is a profoundly and irredeemably morally corrupt institution that allows children to be treated as disposable sex toys for predatory priests, Catholics continue to support the church. In so doing, Catholics fund the cover-up, and make the continuing rape and sexual abuse of children by Catholic clergy possible. 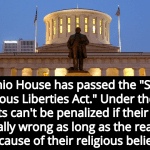 November 14, 2019
Ohio Law Would Allow Students To Give Wrong Answers Because Of Religious Belief
Next Post 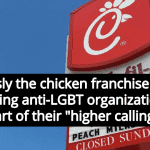 November 18, 2019 Chick-fil-A Promises To Stop Hating LGBT People For Jesus (Again)
Recent Comments
0 | Leave a Comment
Browse Our Archives
get the latest from
Progressive Secular Humanist
Sign up for our newsletter
POPULAR AT PATHEOS Nonreligious
1