Rick Perry: Trump Is ‘Chosen One’ Sent By God To Rule Over United States

Fox News’ Fox & Friends show on Sunday showed a preview of an interview in which soon-to-depart Secretary of Energy Rick Perry said Donald Trump was God’s “chosen one” to be president of the United States.

Appearing on Fox News’ “Fox & Friends,” Perry explains that the president was “the chosen one” sent by God to rule over the United States and “do great things.”

Perry, the current Secretary of Energy and former Texas governor, said that Trump was God’s “chosen one” to lead the United States, just as he chose the kings to lead Israel in the Old Testament.

Fox & Friends preview an interview with Rick Perry, where he says that Trump is “the chosen one” and “sent by God to do great things”

Pete Hegseth: “God has used imperfect people forever,” but what Trump “has withstood is unlike what really any other mortal could understand” pic.twitter.com/ITDAErMJiN

In the clip Perry says:

… God used imperfect people all through history. King David wasn’t perfect, Saul wasn’t perfect, Solomon wasn’t perfect. And I actually gave the president a little one-pager on those Old Testament kings about a month ago. And I shared it with him. I said, ‘Mr. President, I know there are people that say, you know, you were the chosen one. And… I said… you were! If you’re a believing Christian, you understand God’s plan for the people who rule and judge over us on this planet and our government’…

As one might imagine, Perry was roasted on social media for his ridiculous claims. The following is a sample:

Perry is using RELIGIOUS EMOTIONAL BLACKMAIL to influence the public politically, the latest GOP strategy. This is exactly why our government was framed to have Separation of Church and State. (Besides it being upside-down bat shit crazy.)

In a new interview Rick Perry says that Donald Trump is “the chosen one” and was “sent by God to do great things.” Trumpism is a full-blown fascist cult.

Gee Rick, how does the kool aid taste? https://t.co/B7EdREH0Nc

yes please explain to me one more time how our twice-divorced thrice-married degenerate president, who cheated on every wife, paid hush money and lied about it, who has mocked the weak and bullied the helpless, who is every deadly sin personified was chosen by God to lead America

And Perry is not the first Trump cabinet member to make ridiculous claims concerning Trump’s supposed connection to God. Last March Pompeo suggested that God sent President Donald Trump to Earth to save Israel and protect the Jews, claiming that Trump is a possible Queen Esther, poised to defend Israel and save the Jews from Iran.

Bottom line:  Energy Secretary Rick Perry claims President Donald Trump is the “chosen one” sent by God to rule over the United States. 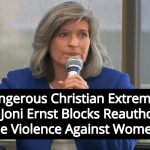 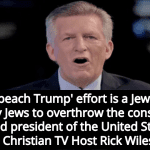 November 25, 2019 Christian TV Host Warns Followers Trump Impeachment Is ‘Jew Coup’
Recent Comments
0 | Leave a Comment
"I am called a bigot, a fool, referred to as "my kind", "nigerian white supremacist ..."
MrPeach Texas Governor: ‘The Problem is Not ..."
"you sure can run your mouth here, now explain your downvote to my harmless comment. ..."
Joshua Booker Million MAGA March: Militias, Proud Boys, ..."
"now I see why you hide your name. Some TROLL in ya=== lol!"
Brian Carnevale Texas Governor: ‘The Problem is Not ..."
"The cowardly censor at FA banned me years ago.There was an uncensored Angry Atheist channel, ..."
Pablo.Dali Fox News Host Bill Hemmer Warns ..."
Browse Our Archives
get the latest from
Progressive Secular Humanist
Sign up for our newsletter
POPULAR AT PATHEOS Nonreligious
1