Mocking Christian Misogyny: Trojan Brand Condoms trolls Christian purity culture’s abstinence only sexeducation programs by placing a gum wall on the National Mall with the slogan “You Are Not Chewed Gum.”

The wall and the slogan come as a response to abstinence only sex education programs promoted by Christian extremists who often try to shame young women and girls by telling them they will be worthless “chewed gum” if they do not remain virgins until marriage.

Today, Trojan and @AdvocatesTweets are taking a stand for honest, inclusive sex education and challenging abstinence-only programs in schools with a gum wall in Washington D.C. Learn more at https://t.co/mysXB06NrX. #NotChewedGum #InformationIsTheBestProtection pic.twitter.com/RbJtdeWAzg

Today, Trojan and @AdvocatesTweets are taking a stand for honest, inclusive sex education and challenging abstinence-only programs in schools with a gum wall in Washington D.C. Learn more at http://NotChewedGum.org.#NotChewedGum #InformationIsTheBestProtection

Trojan is partnering with Advocates for Youth in their campaign for “honest, inclusive sex education.” A website promoting the new campaign notes:

We Are Not Chewed Gum

We’re tired of abstinence-only programs that spread misinformation and shame!

On October 30, 2019, Advocates for Youth and The Trojan Brand unveiled a wall of chewed  gum in Washington DC. You read that right: a gum wall on the National Mall! Trojan and youth activists are tired of abstinence-only-until-marriage programs, rebranded as sexual risk avoidance programs, getting away with comparing young people who have had sex with chewed gum and other shaming, inaccurate metaphors. We confronted Washington DC  with this interactive protest art to reveal the true content of these programs and demand an end to sham sex ed.

Abstinence-only education programs are not effective at delaying the initiation of sexual activity or in reducing teen pregnancy.

Abstinence-only sex education programs are not educational, and rarely provide information on even the most basic topics in human sexuality such as puberty, reproductive anatomy, and sexual health.

Instead, abstinence-only sex education programs are most often covert vehicles to promote faith-based superstition and shame.

My former church taught us teen girls at least every other month about how if we are not pure when we get to the wedding alter we are comparable to chewed gum. The man that taught this also raped me & my friends when we were 15.

Wow. kudos to Trojan for this! I’m lucky I grew up in NY, i’ve never heard of such a thing. I guess my friends and I were all “chewed gum” �Newsflash, wanting and having sex is normal!! How sad these “values” from Puritanical beliefs are still being clung to in 2019. �

I was taught “purity culture” and given a promise ring in Sunday school when I was 14. I was not sexually active but my best friend who was older was, and she was called chewed gum or a dirty cup among other things. This is specifically for kids like us.

I grew up surrounded by this theology. It is tragic, not only the guilt it caused, but how many women stayed in abusive relationships because of these analogies. They thought no one else would want them.#NotChewedGum

Adding my appreciation to the choir! THANK YOU for this campaign. Lots of people (girls in particular) need to hear this message. #PurityCulture is toxic. 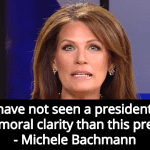 October 31, 2019
Michele Bachmann: No President Had 'Greater Moral Clarity' Than Trump
Next Post 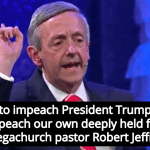