You will know them by their fruits: An image of a uniquely American nativity depicting Jesus, Mary, and Joseph as a family separated at the border and placed in cages goes viral, and shames white conservative Christians.

The image makes a potent statement concerning the cruelty and the hypocrisy of white conservative Christians who continue to support President Donald Trump despite the administration’s immoral and criminal treatment of migrants seeking asylum in the United States.

A Southern California church is displaying a nativity scene depicting Jesus, Mary and Joseph as a family separated at the U.S.-Mexico border.

A Methodist church in California has unveiled a nativity scene depicting Jesus, Mary and Joseph as refugees in cages. CBS Los Angeles reports the display at the Claremont United Methodist Church is stoking debate related to the Trump administration’s separation policies at the U.S. southern border.

The display shows classic nativity figurines of Joseph and Mary in cages on either side of a cage containing the manger of Jesus. The Rev. Karen Clark Ristine, who says she was “stirred to tears” by the depiction, says the church uses its annual nativity scene to tackle a societal issue, such as the homeless population of Southern California.

What if this family sought refuge in our country today? Imagine Joseph and Mary separated at the border and Jesus no older than two taken from his mother and placed behind the fences of a Border Patrol detention center as more than 5,500 children have been the past three years. Jesus grew up to teach us kindness and mercy and a radical welcome of all people.

The question is rhetorical. We know the answer. White conservative Christians would and do support cruel and inhumane policies that degrade and dehumanize brown people seeking asylum in the United States.

In fact, earlier this year the Trump administration went to court to argue that the government is not required to provide toothbrushes, soap, or even beds to migrant children being detained at the border.

And in February 2019 a report was issued noting that thousands of migrant children separated from their families at the border are being sexually abused while being held in government administered shelters.

In addition, the Trump administration says it can’t reunite missing migrant children with their families; instead, many of the children are being shipped to a Christian adoption agency with ties to Education Secretary Betsy DeVos.

Yet despite the Trump administration’s well documented cruelty and inhumanity towards migrant children, the vast majority of white conservative Christians continue to support those policies.

Is this why we say “Merry Christmas”? 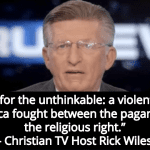 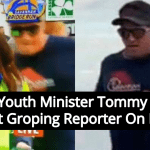