Earlier this year Hoschton City Councilman Jim Cleveland defended his mayor’s decision to discriminate against a black man by citing his sincerely held Christian beliefs and his opposition to interracial marriage.

After making headlines for his openly racist claim, Cleveland was faced with mounting opposition and a recall election next month, and so decided to resign rather than fact the public humiliation of a recall.

A Georgia city councilman resigned on Tuesday amid accusations of racism due to his strong opposition to interracial marriage.

Hoschton City Councilman Jim Cleveland said he chose to resign to avoid facing voters in a recall election next month and he didn’t want to give his opponents the pleasure of saying they voted him out.

They filed ethics complaints and when that didn’t go anywhere they started a recall against me and the mayor. It went all the way through and it got approved for a recall election. My thinking of it was, ‘If they got it this far, then why go through an election and let them recall me? I’ll just resign.’

I am still, in my opinion, a respected member of this community. I have more people, I believe, that feel the way I do about everything. But the ones that are against me are a very, very vocal group. And I’m just tired of hearing it.

They are calling me a racist and I don’t consider myself a racist and I’ll tell you why. I have very good friends that are are black. I have Spanish, Asians, all kind of members in my church, and none of them consider me a racist.

I was raised in a Southern Baptist church and I have been taught to believe, and it makes a lot of sense to me, that God created all these different races and if he had wanted them all commingled into one race, he would have done it himself. Why did he create all these races, if he didn’t mean for us to be separated by race?

In short, while deploying racist rhetoric Cleveland claims he can’t be a racist because some of his “very good friends” are black.

In addition, Cleveland believes that despite being as racist he is still “a respected member of this community” and that many of his neighbors share his racist beliefs.

I was raised in a Southern Baptist church…

Bottom line: Hoschton City Councilman Jim Cleveland resigns after stating his opposition to interracial marriage and saying that seeing “blacks and whites together” makes his “blood boil” because “that’s just not the way a Christian is supposed to live.” 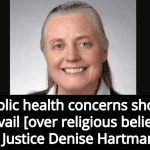 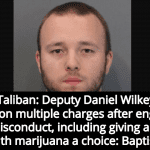 December 11, 2019 Tennessee Deputy Indicted After Forcing Woman To Choose Between Baptism Or Jail
Recent Comments
0 | Leave a Comment
""follow my rules or burn for ever" ----- That's NOT what the Bible says."I agree, ..."
Mark Bradshaw Ana Kasparian’s Glorious Rant On Christianity ..."
"They're blaming the Democrats for banning Dr Seuss and posting warnings about Sesame Street etc.Of ..."
Jim Jones Fox News Host Bill Hemmer Warns ..."
"I agree, but the question is a translation issue, not an interpretation issue so my ..."
Kit Hadley-Day Ana Kasparian’s Glorious Rant On Christianity ..."
"“the authority depends on the topic” ----- Yes. And the topic here is what the ..."
Mark Bradshaw Ana Kasparian’s Glorious Rant On Christianity ..."
Browse Our Archives
get the latest from
Progressive Secular Humanist
Sign up for our newsletter
POPULAR AT PATHEOS Nonreligious
1