Tilting at Windmills: In a bizarre and incoherent attack on windmills President Donald Trump confesses: “I never understood wind,” while claiming he knows windmills “very much” and has “studied it better than anybody.”

Speaking to conservatives in Florida, Trump once again attacked windmills.

President Donald Trump went off on a longtime subject of his ire, windmills, during a weekend speech to a conservative group in Florida.

While Trump was mocking the Green New Deal to attendees of the Turning Point USA conference Saturday, he turned his attention to wind power.

At the event Trump said:

I never understood wind. I know windmills very much, I have studied it better than anybody. I know it is very expensive. They are made in China and Germany mostly, very few made here, almost none, but they are manufactured, tremendous — if you are into this — tremendous fumes and gases are spewing into the atmosphere. You know we have a world, right?

So the world is tiny compared to the universe. So tremendous, tremendous amount of fumes and everything. You talk about the carbon footprint, fumes are spewing into the air, right spewing, whether it is China or Germany, is going into the air.

A windmill will kill many bald eagles. After a certain number, they make you turn the windmill off, that is true. By the way, they make you turn it off. And yet, if you killed one, they put you in jail. That is OK. But why is it OK for windmills to destroy the bird population?

President Trump: “I never understood wind, you know I know windmills very much. I’ve studied it better than anybody.” pic.twitter.com/0U432SgNA2

Trump’s nuts rant about wind energy: “I never understood wind. You know, I know windmills very much… Gases are spewing into the atmosphere. You know we have a world, right? So the world is tiny compared to the universe. So tremendous, tremendous amount of fumes & everything.” pic.twitter.com/DvkJq9NbWg

This is not the first time Trump has advanced irrational and nonsensical attacks against windmills. Earlier this year, Trump claimed that the noise from wind turbines “causes cancer.”

And previously the ignorant Trump mocked wind power, claiming people would have to turn off their TV sets if the wind wasn’t blowing.

Bottom line: Donald Trump, America’s Idiot-in-Chief, confesses: “I never understood wind,” while claiming he knows windmills “very much” and has “studied it better than anybody.” 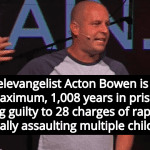 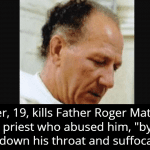 December 27, 2019 Teen Kills Pedophile Priest Who Abused Him By Ramming Crucifix Down Priest's Throat
Recent Comments
0 | Leave a Comment
Browse Our Archives
get the latest from
Progressive Secular Humanist
Sign up for our newsletter
POPULAR AT PATHEOS Nonreligious
1