Youth Minister Tommy Callaway has been charged with sexual battery after groping reporter Alex Bozarjian on live TV while she was reporting on a race in Savannah.

A Georgia man who was videotaped slapping a female reporter’s rear on live TV was arrested Friday on a misdemeanor charge of sexual battery.

Savannah police spokeswoman Bianca Johnson in Savannah confirmed that Thomas Callaway, 43, of Statesboro was charged in connection with the incident that occurred while WSAV-TV reporter Alex Bozarjian was broadcasting live as runners streamed past her on a prominent bridge in the coastal city.

Callaway,  a 43-year-old married father of two daughters who is affiliated with Pittman Park United Methodist Church, was caught on live television last week groping Bozarjian while she was reporting on the Enmarket Savannah Bridge Run in Savannah, Georgia.

In a tweet after the incident that went viral, reporter Bozarjian called out the perpetrator, later identified as Callaway, declaring:

To the man who smacked my butt on live TV this morning: You violated, objectified, and embarrassed me. No woman should EVER have to put up with this at work or anywhere!! Do better.

Bozarjian told police that Callaway slapped and then grabbed her buttocks during the unfortunate encounter.

After being caught, Callaway issued a non-apology apology while speaking with WSAV News 3, at one point saying:

It was an awful act and an awful mistake.

I am not that person that people are portraying me as. I make mistakes, I’m not perfect and I’m asking for forgiveness…

Alex Bozarjian is glad that law enforcement is taking this matter seriously. She feels that a reporter should be able to do her job without being assaulted. Alex wants to thank the members of the public who have reached out to her to offer support. If this case goes to trial, she will be a witness. For that reason, she will have no further comment until the case concludes, but she does hope that there will be a just result.

In addition, WSAV, Bozarjian’s employer, issued the following statement regarding the arrest:

The conduct displayed by one man toward Alex Bozarjian during her live coverage of Saturday’s Savannah Bridge Run was reprehensible and completely unacceptable.

No one should ever be disrespected in this manner. The safety and protection of our employees is WSAV-TV’s highest priority.

CNN reports Callaway turned himself in on Friday and was released on a $1,300 bond.

Sexual battery is a misdemeanor in Georgia, punishable by up to a year in jail. State law defines the crime as making “physical contact with the intimate parts of the body of another person without the consent of that person.”

Bottom line: Youth Minister Tommy Callaway has been charged with sexual battery after groping reporter Alex Bozarjian on live TV while she was reporting on a race in Savannah. 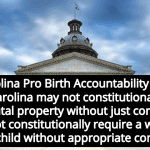 December 13, 2019
South Carolina Bill Would Compensate Women Forced To Give Birth
Next Post 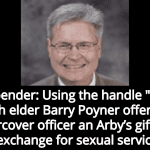