He did it because “God wills it”: Samuel Gulick, 18, is charged with throwing a Molotov cocktail at a Delaware Planned Parenthood clinic earlier this week.

Gulick, who often posted anti-abortion and pro-Christian content on social media, is facing federal charges after allegedly throwing a Molotov cocktail at the Planned Parenthood facility in Delaware. If convicted of the most serious offense, Gulick faces a statutory minimum of five years and a maximum of 20 years in prison and a $250,000 fine.

A Delaware man threw a lit incendiary device at a Planned Parenthood facility and spray-painted the Latin words for “God wills it” on the building, federal prosecutors said Monday.

Samuel James Gulick, 18, of Middletown, was charged with intentionally damaging a building that provides reproductive health services and maliciously damaging a building used in interstate commerce through the use of fire or a destructive device, the US Attorney’s office in Delaware said.

A press release via the Department of Justice, U.S. Attorney’s Office, District of Delaware, notes:

Samuel James Gulick, 18, of Middletown, Delaware was charged today in the United States District Court for the District of Delaware in connection with utilizing an incendiary device to damage the Planned Parenthood facility in Newark, Delaware on January 3, 2020.

Gulick is charged in a three-count complaint with: (1) maliciously damaging a building used in interstate commerce through the use of fire or destructive device; (2) intentionally damaging a facility that provides reproductive health services; and (3) possession of an unregistered destructive device under the National Firearms Act.

If convicted of the most serious offense – maliciously damaging the Planned Parenthood facility – Gulick faces a statutory minimum of five years and a maximum of 20 years in prison and a $250,000 fine.

(Gulick) had liked Instagram posts about the Crusades and frequently posted anti-LGBTQ, anti-refugee, anti-abortion, and pro-Christian content, often advocating for a culture war…

A  cached versions of Gulick’s Instagram account and activity gives a picture into the mind of this deeply disturbed Christian terrorist. For example, in an Instagram post from September, Gulick posted a meme with the title “The Consequences of Roe v. Wade?” and the claim that “60 million lives have been destroyed since 1973.”

Under the meme Gulick wrote:

The Nazis said killing millions of Jews was a national health issue. Democrats are using the same excuse to kill American children. When will we start shooting? Its about time we kill these genocidal demons.

In another post from September, Gulick shared a drawing that crossed out “Coexist” and replaced it with “Convert.” Beneath it, he wrote, “Us white folks don’t oppress minorities, we subjugate minorities…”

If a woman had one piece of bread for every gender there is, she could make exactly one sandwich. Remember Waco and Ruby Ridge. Deus Vult

According to reports, Gulick was captured on surveillance video spray-painting the Latin phrase “Deus Vult,” meaning “God wills it,” outside the Planned Parenthood clinic prior to throwing the incendiary device.

I view this as a an act of domestic terrorism, and an attack on health and reproductive rights and yet another way to limit women’s freedom to have body autonomy. I think everybody should be able to access healthcare without fear, shame or stigma, and this kind of attack is a way to thwart that.

Bottom line: Christian terrorist Samuel Gulick is facing federal charges after fire bombing a Delaware Planned Parenthood clinic.  If convicted of the most serious offense, Gulick faces a statutory minimum of five years and a maximum of 20 years in prison and a $250,000 fine. 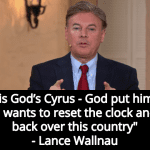 January 7, 2020
Preacher: God Put Trump In Office, But Satan Wants To ‘Take Back Over This Country’
Next Post 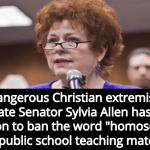 January 9, 2020 Arizona Bill Would Ban Discussions Of Homosexuality In Public Schools
Recent Comments
0 | Leave a Comment
"Tippling Philosopher is widely regarded as perhaps the best Patheos non religious blogs."
Geoff Benson Fox News Host Bill Hemmer Warns ..."
"Reminds me of condemnations of rock-&-roll by Southern Baptists (& other like-minded fundies) back in ..."
Georgia Sam Pentecostal Christians Are Burning Australia’s Sacred ..."
"I am called a bigot, a fool, referred to as "my kind", "nigerian white supremacist ..."
MrPeach Texas Governor: ‘The Problem is Not ..."
"you sure can run your mouth here, now explain your downvote to my harmless comment. ..."
Joshua Booker Million MAGA March: Militias, Proud Boys, ..."
Browse Our Archives
get the latest from
Progressive Secular Humanist
Sign up for our newsletter
POPULAR AT PATHEOS Nonreligious
1