A US drone strike ordered by President Donald Trump on a Baghdad airport has killed a top Iranian commander in a major escalation in regional tensions that have pitted Tehran against Washington and its allies in the Middle East.

The Pentagon on Thursday confirmed a strike killed Qasem Soleimani, who as head of the Islamic Revolutionary Guards Corps (IRGC) Quds Force became the architect of Tehran’s proxy conflicts in the Middle East. The strike was carried out with a drone, a US defense official told CNN.

On Twitter, #WWIII trended after news of the assassination went viral, with many fearing the ill-planned stunt would send the region, and possibly the world, into yet another devastating war.

No one wants more — least of all Trump. But the best way to prevent war with Iran is to stop them from regional aggression through restored deterrence — not paying off the terrorists who are responsible for the deaths of hundreds of Americans so they can pursue more terror.

While  Matt Walsh of the conservativeDaily Wire’s Matt Walsh defended Trumps actions by claiming that being anti-war is a “stupid, unserious position for children and idiots.”

“Anti-war” is a stupid, unserious position for children and idiots. Obviously there are times when military strikes are necessary and appropriate. I believe this is one of those times. The other option is, what, to cower in the corner while our embassies are under siege? Absurd. https://t.co/vTbZy9Reny

And Townhall senior columnist Kurt Schlichter gleefully declared: “Donald Trump certainly gave those sons of bitches something to mourn about…”

However, while conservatives were celebrating, more serious and sober minds were contemplating the prospect of a new Holy War.

For example, expressing the concerns of many thoughtful observers, Matthew Gabriele, Professor of Medieval Studies and Chair of the Department of Religion and Culture at Virginia Tech, tweeted:

listen, this war with Iran is going to be considered a holy war. by both sides. talk to some scholars of religion. #acrel #twitterstorians

listen, this war with Iran is going to be considered a holy war. by both sides. talk to some scholars of religion

This is a developing story. Earlier today, CNN reported that the U.S. is sending thousands of additional troops to the Middle East:

The US will deploy thousands of additional troops to the Middle East as tensions with Iran mount following the airstrike that killed Iranian commander Qasem Soleimani, a US defense official tells CNN. 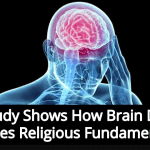 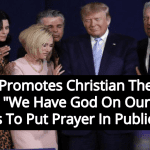 January 4, 2020 Trump Tells Evangelicals ‘God Is On Our Side’ While Promising To Put Prayer In Schools
Recent Comments
0 | Leave a Comment
Browse Our Archives
get the latest from
Progressive Secular Humanist
Sign up for our newsletter
POPULAR AT PATHEOS Nonreligious
1