Ford, a new member of the Mississippi House of Representatives, announced her new legislation via her official Facebook page. In her post Ford admits that the legislation “will more than likely never see the light of day,” while declaring:

I filed my very first Bill… one the Lord planted in my heart years ago: To begin every morning with The Lord’s Prayer in every public school in Mississippi.

First step is requesting Congress to allow prayer back in school.

Yesterday, January 27, 2020, was a historic day for not only Governor Tate Reeves as he presented his State of the State address to the people of Mississippi – favorite line: “we’ve been singing the Blues long enough, it’s time to sing Gospel now – the Good News”.

It was also the day I filed my very first Bill. A Bill that will more than likely never see the light of day. But one the Lord planted in my heart years ago: To begin every morning with The Lord’s Prayer in every public school in Mississippi.

Can you only imagine what would begin to happen in the Spiritual Realm if the children would stand before Him lifting their heads in prayer asking Him to “lead us not into temptation but deliver us from evil” – oh how we would see the atmosphere begin to change across Mississippi as depression and suicide would stop becoming the norm, we would watch as our children’s grades begin to rise, their hearts softened and their minds saturated with good thoughts and not thoughts of addictions. The Word says “the eyes of the Lord range to and fro searching for those hearts committed to Him” and I believe that His eyes would fall on our children every single morning as they continually sought him to “give them this day their daily bread …” my heart melts just imagining it!

First step is requesting Congress to allow prayer back in school. Stranger things have happened: it got taken out by one hell-bent woman. Maybe, just maybe, this heaven-bent woman could have something to do with getting it put back in. I know there is a lot of editing to be done, but I just pray it will at least be taken seriously.

Reporting on the story for the Madison County Journal, Tyler Cleveland notes:

Mandatory or faculty-led prayer has been largely banned from public elementary, middle and high schools by a series of Supreme Court decisions since 1962.

Section 8524(a) of the Elementary and Secondary Education Act of 1965 sought to clarify the guidelines for public schools by holding that while teachers could not lead or encourage a prayer, they also cannot try to dissuade a student from doing so.

“When acting in their official capacities as representatives of the State,” the law says, “teachers, school administrators and other school employees are prohibited by the First Amendment from encouraging or discouraging prayer and from actively participating in such activity with students.”

For the record, Ford is a dangerous charlatan who has no business holding public office. Her scheme to force public school students to participate in Christian prayers is simply reprehensible, and exemplifies the moral and intellectual depravity common among the most rabid contemporary conservative Christians. 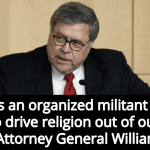 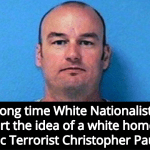 February 1, 2020 Coast Guard Officer Gets 13 Years For Terrorist Plot To Establish ‘White Homeland’
Recent Comments
0 | Leave a Comment
"If I believed in cures I'd say the Tippacanoe one is coming true."
NoMoreFalseGods My Pillow Guy Delivers Religious Rant ..."
"He's British so perhaps a bird cage liner tabloid.90% of all cats will not use ..."
epeeist ‘God Fearing’ Boxer Billy Joe Saunders ..."
"which is nice and all, but not a reason to get to stand next to ..."
Kit Hadley-Day My Pillow Guy Delivers Religious Rant ..."
"Interesting how he offers to donate money FROM HIS NEXT FIGHT. Meaning it´s not his ..."
LaMaria ‘God Fearing’ Boxer Billy Joe Saunders ..."
Browse Our Archives
Follow Us! 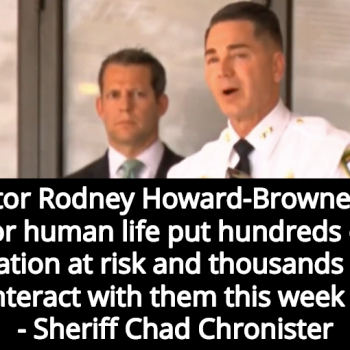