Dreams of Theocracy: Speaking at a campaign event Friday evening President Donald Trump told evangelical supporters “We have God on our side” while promising to put prayer in public school.

U.S. President Donald Trump on Friday said his Democratic opponents would tear down crosses and pledged to bring prayer to public schools at a re-election rally to shore up evangelical support.

Trump spoke on the outskirts of Miami at the King Jesus International Ministry, a “prosperity gospel” church that teaches that the faithful will be rewarded with health and wealth on earth.

President Trump rallied evangelical supporters in Miami on Friday, positioning himself as a champion of religious communities while ripping his Democratic opponents as “radical” leftists pursuing an “extreme, anti-religious and socialist” agenda.

Evangelicals, Christians of every denomination and believers of every faith, have never had a greater champion in the White House – not even close – than you have right now.

Together, we’re not only are we defending our Constitutional rights, we’re also defending religion itself, which is under siege. Every Democrat candidate running for president is trying to punish religious believers and silence our churches and our pastors.

I do really believe we have God on our side…

During his speech, Trump claimed that Democrats were waging war against religion:

These angry radicals want to impose absolute conformity by censuring speech, tearing down crosses and symbols of faith and banning religious believers from public life.

At the conclusion of his speech, Trump declared:

My administration will never stop fighting for Americans of faith. We will restore the faith as the true foundation of American life.

Bottom line: Speaking at the launch of his new “Evangelicals for Trump” coalition Friday evening, Trump promotes Christian theocracy while claiming that “We have God on our side” and promising to put prayer in public schools.

Watch the speech below: 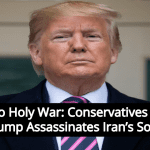 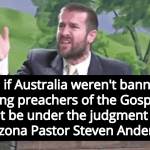 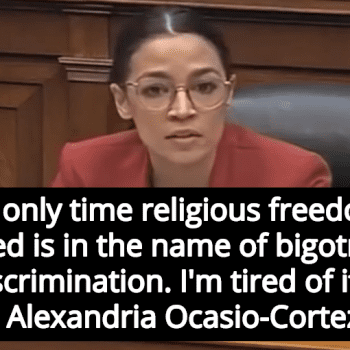