Christian News Site: Pete Buttigieg ‘Is Deserving Of Death’ For Being Gay

More of that Christian love: Charisma News, a popular conservative Christian news site, is running a column claiming that Democratic presidential candidate Pete Buttigieg “is deserving of death” for being gay.

In an obnoxious post published by Charisma News, Bert Farias, founder of Holy Fire Ministries, “a ministry committed to carrying the spirit of prayer and revival to the Church and the nations,” calls for the death of Pete Buttigieg and anybody else who approves of homosexuality.

In the name of progressivism we now have a male presidential candidate who has a husband whom he publicly introduces and even kisses without shame, while millions of Americans applaud and approve. And perhaps worse yet is that the shock effect has been so reduced that the rest of us are numb and desensitized to this most shameful and abominable behavior.

In fact, when those who practice such things that are “deserving of death” also approve of others who practice them (Rom. 1:32), it is one of God’s final signs of His wrath on a society. This is a description of gay activism and constantly pushing for its normalcy and marginalizing those who disapprove. This is present-day America. How far we’ve fallen!

When millions of Americans applaud Pete Buttigieg and his “husband,” it is the death rattle of a nation. When the never-Trump-ers and Trump-haters counteract with judgment and accusations of adultery against our own president, in response to Buttigieg’s abominable lifestyle, they are grasping for straws in a last gasp of air of a drowning argument.

Farias is a monster, a bigot, and a hateful human being.  He deploys his ignorant religious superstition as a weapon to harm and disparage those that threaten his backward world view. For example:

At the expense of being called a homophobic bigot I release the word of God on holy fire! AMERICA’S DECADENCE AND THE AWFUL FATE OF PERVERTED MEN https://t.co/Am3N3hdPUg via @holyfireorg #truth #fire #homophobic #Godis #repent #turntoChrist

Go ahead and call me a homophobic bigot. Truth is truth no matter how many oppose it. A SOBER REMINDER: APPROVING OF HOMOSEXUALITY IS DESERVING OF DEATH https://t.co/Iy9HCU61iW via @holyfireorg #homosexuality #Buttigieg #satanicphilosophy #deathrattle #saveAmerica #savethechurch

HARD TRUTH: What democratic presidential candidate Pete Buttigieg and others of his kind need to hear—Being gay is not only unnatural (Romans 1), it is a demon spirit that is so putred smelling that other demons stay away from it. Yet humans embrace them. Gross!

Farias concludes his hateful column for Charisma News by citing the Bible as evidence for his claim that Buttigieg, all other LGBT people, and all those who support LGBT people, should be put to death. Farias declares “the Scriptures are clear” before citing Rom. 1:28, 32:

“And since they did not see fit to acknowledge God, God gave them over to a debased mind, to do those things which are not proper. … Those who commit such things are worthy of death. They not only do them, but also give hearty approval to those who practice them” (Rom. 1:28, 32).

Bottom line: One of the nation’s leading conservative Christian websites publishes a column advocating for the death of Democratic presidential candidate Pete Buttigieg becuase he is gay, and goes even further by claiming that all LGBT people and al;l those who are allies to LGBT people, are “deserving of death.” 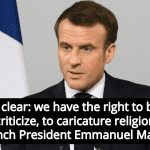 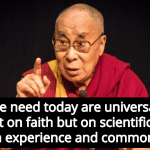 February 14, 2020 Dalai Lama: We Need Values Based Not On Faith But Science And Common Sense
Recent Comments
0 | Leave a Comment
Browse Our Archives
Follow Us!